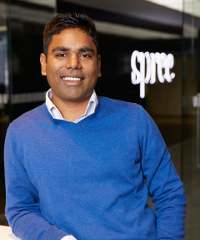 This is according to Krishna Motukuri, CEO of Media24’s e-commerce division that spawned Spree in April this year. Spree is the first online shoppable magazine in South Africa, where editors of Media24’s leading fashion magazines handpick, style and display their favourite items on Spree.co.za.

Motukuri said combining editorial content with e-commerce is proving to be an attractive revenue producing platform in media spaces which are seeing decreasing advertising revenue.

“A lot of these magazines that we have, like the fashion magazine, if you flip through them you will see these really beautiful clothes that are artfully done in fashion spreads, and as a reader when you look through those, you think: ‘I want to buy these things, How do I go about it?’ And the truth is, you have no choice but to put your magazine down, take some notes and then hop in the car and go to the mall and find that product, and if you are lucky you will find it,” explained Motukuri in an interview with How we made it in Africa.

“There was always this gap between magazines inspiring customers [to buy products] and customers actually going and getting those products. With e-commerce it is finally possible to actually allow customers to just browse through the magazines and click from within the magazine and get their products delivered to their home. So there is a customer perspective which is a clear need which was not addressed before [and] can now be addressed. It’s almost like a perfect storm… So Spree essentially addresses a customer problem, by allowing them to shop with the magazines they love and at the same time offers magazines this new revenue channel which will be the future in the online world.”

Naspers, the parent company of Media24, owns a logistics company that handles the warehousing and distribution of their media publications and e-commerce initiatives, including Spree.

The future of e-commerce in Africa

Motukuri, who previously headed up Amazon India and has established numerous e-commerce businesses over the years, said Spree has been doing well in the six months since its launch and they have plans to launch other e-commerce initiatives in the near future, although he couldn’t release any further information on the matter at the time of the interview.

He added that Media24 is also open to expanding its e-commerce brands (such as Spree) into the rest of the African continent.

“I worked with Amazon several years ago, and I [have spent] 13 years in e-commerce and from that perspective I can comment that Africa is certainly the next frontier for e-commerce,” said Motukuri. “Just looking at the growing middle class in the various countries in Africa – Nigeria, Kenya and here in South Africa – I think there is tremendous opportunity for e-commerce, specifically for Nigeria and Kenya where I think the infrastructure is not as well developed as in South Africa. The opportunity may be even bigger.”

“The same thing is going to happen with e-commerce,” he continued. “People will skip the entire physical retailer – big box retailer stores – and go straight to e-commerce because it is a lot cheaper to build a centralised inventory model with efficient distribution systems than build stores in every nook and corner. So that is my belief.”