Arsenal players wear the logo of airline Emirates, while the Manchester United shirt promotes insurance broker Aon. This season’s English Premier League will, however, see one team pitching the case for investment in Africa. 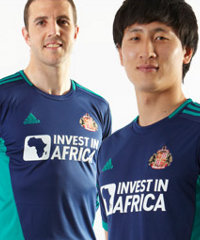 It was this week announced that Sunderland football club has signed a sponsorship agreement with Invest in Africa, a not-for-profit initiative backed by Tullow Oil. Invest in Africa will be Sunderland’s main shirt sponsor for a minimum of two seasons. The value of the deal is not known but Sunderland vice-chairman David Miliband told The Independent that it is the most lucrative in the club’s history.

Tullow Oil is the founding partner of Invest in Africa, but it is currently in discussions with other major companies operating in Africa to also support the initiative.

But why is an oil company involved in an initiative like this? Well, Tullow has major investments in Africa. It currently operates in 15 countries on the continent. Tullow is producing oil in Ghana and is expected to start pumping crude in Uganda later this year. In March the company also announced an oil find in Kenya, although the commercial viability is yet to be confirmed.

Tullow says that Invest in Africa is not a charity but a business-to-business initiative. “Invest in Africa is building a partnership of founding companies with a track record of success working in Africa who can share their expertise to inspire new investment and business opportunities into the continent,” reads a statement.

“Sunderland will act as the global platform for the initiative, spreading the message of Invest in Africa to the Premier League’s 4.7 billion viewers, around 300 million of which are in Africa.”

Tullow chief executive Aidan Heavey commented that “Football is a major activity [in Africa]. Every village, every town, every city has got football … Getting the Invest in Africa brand on the Sunderland shirt was a key way of … promoting the brand of Invest in Africa … Football is a global industry. It is a huge audience, both in Africa, and worldwide.”

According to Invest in Africa, the continent has significant potential for business and investment. It says that economic development in Africa is currently being driven by the private sector – not aid.

“At Tullow Oil we’ve known for years that Africa is a thriving and great place to do business. But potential foreign investors are still missing out because of outdated perceptions of what it’s like to work in Africa,” said Heavey.

“Invest in Africa wants to bridge this gap by challenging misconceptions, showing that Africa is open for business and helping more investors into Africa in partnership with local businesses. Ultimately this will make Africa a more stable and attractive place to work, which is in everyone’s interest,” he added.