Nairobi-based Pete’s Coffee calls itself a fuel to innovation. The coffee shop keeps Kenya’s technology entrepreneurs caffeinated as they work on building their start-ups and creating innovative ways to solve everyday challenges. 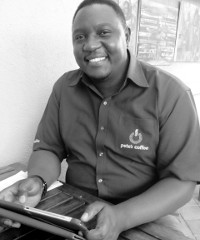 It began four years ago as a concession store inside the iHub, a co-working space for tech entrepreneurs. The iHub has played an instrumental role in the development of Nairobi’s technology ecosystem, dubbed Silicon Savannah.

Pete’s Coffee has grown together with the start-ups that joined the iHub. It now also runs a second outlet, a Mexican-themed restaurant in the same Bishop Magua Centre. In addition to the iHub, the building also hosts mobile entrepreneurship incubator m:lab East Africa, start-up accelerator Nailab and dozens of other IT-focused companies.

Technology enthusiasts from across the world visit the premises, IT companies hold events there, CEOs seeking to connect with the community regularly, and journalists and researchers come to interview entrepreneurs. And it’s at Pete’s Coffee that they get their lattes, mochas and cappuccinos.

Pete Owiti, the founder, credits the success of the brand to both being in a supportive community and surrounded by other start-ups.

“We have been an integral part of the iHub and the technology community here. We have watched each other grow. Companies like Kopo Kopo (a merchant payment platform) started with a team of four. They drank our coffee and we were one of their first clients. We kept them caffeinated, now they run an established business,” Owiti explains.

He describes the early days at his counter inside the iHub as a “planting season” noting he and his wife Christine would do eight-hour shifts. And although keeping coders and entrepreneurs caffeinated has been challenging at times, he has had many moments of pride and joy.

“I have been privileged to serve coffee to big shots from Nokia, Samsung, Google… they have passed through here and one thing they resonate with is coffee, because it is universal. We always strive to give them a good experience,” he says.

The iHub has hosted high profile guests such as former Nokia chief executive Stephen Elop and executive chairman of Google Eric Schmidt. Pete’s Coffee now sells it own branded packaged coffee, which Owiti says is a hit, particularly among guests from outside Kenya.

“All these people when they come here, even Mr Schmidt, drink and also take a packet with them. As a result Pete’s Coffee has gone to all corners of the world and we have received positive reviews,” he says. 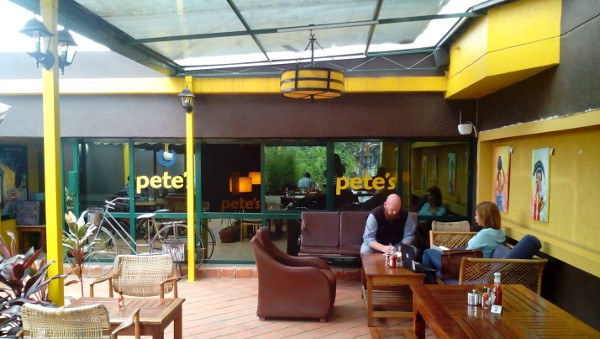 Owiti is now looking to expand the brand outside the Bishop Magua building. In coming months he plans to open in two shopping malls in up-market Nairobi suburbs.

“Since we opened the restaurant we have attracted people within this area who are not in technology. They come here for meetings and to relax. So Pete’s Coffee is not just for techies. The quality of our coffee is unsurpassed, our staff is friendly and our pricing is right. So we have what it takes to compete with the big names out there,” he says.

Initially, Owiti says, getting shopping malls and landlords to give him space was challenging since they preferred to have more established brands as their tenants. “But things have turned around and now malls are approaching us to take up space in their facilities. People have begun to recognise Pete’s as a name in the market.”