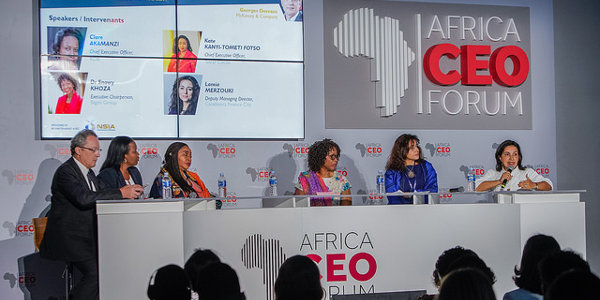 The “Women In Business” initiative, launched three years ago by the AFRICA CEO FORUM, grew out of two observations: only 5% of CEOs in Africa are women, and they only occupy 14% of boardroom positions.

Faced with this situation, the AFRICA CEO FORUM decided to take action by making the advancement of female leadership a key priority. Every year, the forum engages and unites the entire business community around a clear mission: to significantly advance the feminisation of top decision-making positions in African companies.

To meet this goal, the “Women In Business” initiative – organised in partnership with Globacom this year – is expanding its reach through three flagship actions.

Firstly, a high-level panel discussion where women with exceptional track records will discuss the means and conditions required to gain entry and impose their presence in Africa’s boardrooms. To open the discussion, Bella Disu, Executive Vice President of Globacom, will present the keys to her success and her recommendations on how to overcome this challenge.

Secondly, a workshop with 100 business leaders, both men and women. Their goal: work together to develop a diversity charter. Raising awareness among senior executives around the cause of gender diversity; implementing quotas and concrete action plans to increase the proportion of women in business; creating and applying human resource policies designed to identify and promote female talent: the role of the gender charter will be to guide African business leaders as they roll out tangible and measurable actions to achieve equality between men and women.

Finally, the highlight of the initiative will be the “Gender Leader” award, during the AFRICA CEO FORUM AWARDS 2019. This recognition will be granted to a company that has distinguished itself, over the last year, through its actions to promote female leadership, particularly within its management bodies, according to three criteria: women’s representation on the company’s board of directors, the percentage of women on the executive committees of the group and its subsidiaries and finally, the company’s strategy to promoting female leadership.

For the past six years, the Africa CEO Forum has been the largest international gathering of decision-makers and financiers from the African private sector. Its most recent edition, last March in Abidjan, brought together 1,500 CEOs, public-sector decision-makers and investors in Africa from all over the world for two days to debate the transformation needed for African champions to rise to the challenge of international competition. The Forum is organised by Jeune Afrique Media Group, publisher of Jeune Afrique and of The Africa Report, and by Rainbow Unlimited, a Swiss company specialised in events organisation and economic promotion.