Over the next two decades, businesses will be exposed to numerous environmental and social challenges that could bring both risks and opportunities. 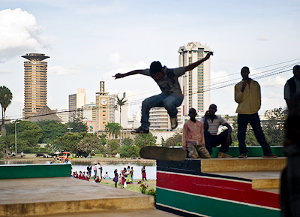 Nairobi, Kenya. By 2030, the majority of Africans will live in cities.

In a recent report, KPMG identified ten sustainability megaforces that will impact African and global companies over the next 20 years. They are:

Governments could introduce new laws and regulations to curb climate change, including energy efficiency requirements, carbon taxes, emissions caps and fuel tariffs. Companies might also damage their brands, with the added threat of litigation, if they are seen doing the wrong thing.

While climate change could lead to a rise in agricultural output in higher latitude areas such as Northern Europe, other areas, particularly Africa, could experience falling yields.

According to KPMG, all businesses, regardless of sector, size, or location, will find it hard to plan for and manage energy costs, especially those related to fossil fuel use.

This is an opportunity for firms that can help customers become more energy efficient. Similarly, companies that can bring low-carbon power to the world’s poorest people by “leapfrogging” large-scale utility infrastructure are well-placed.

Resource scarcity could be an opportunity for companies to develop substitute materials, and to recycle resources from waste products.

Water scarcity can pose a major risk to the growth of many companies. KPMG says that businesses operating in areas where freshwater is scarce, may be vulnerable to water shortages, declines in water quality, water price volatility and reputational issues.

Businesses that use water more efficiently or eliminate water use entirely through closed-loop processes and recycling can save money and resources while also reducing business risks.

How will this impact business? According to KPMG, companies can expect considerable supply challenges and price swings as a result of such a rapid growth in the number of people, coupled with higher demand for resources. As life expectancy increases, conventions around working life, retirement and personal finance could also be challenges.

Workers in emerging economies are likely to develop higher expectations. As a result, the advantages that many companies have experienced from “cheap labour” in developing countries are likely to be eroded by the growth and newfound influence of the middle class.

By 2030, all developing regions, including Africa, will have the majority of their citizens living in urban areas.

Global food prices could rise up to 90% by 2030, driven by pressure from other megaforces such as population growth, water scarcity and deforestation.

This presents a major opportunity for large agricultural producers to cater for the food needs of the growing middle class, especially for more expensive products such as meat and dairy.

Forests cover 31% of the planet’s land surface and supply critical resources to local communities and the global economy. In addition, forests also provide services such as soil and water conservation, avalanche control and sand dune stabilisation as well as playing a vital role in keeping greenhouse gas emissions in check.

It is estimated that since the start of the century, the area covered by primary forests (those undisturbed by human activity) has decreased by more than 40 million hectares (an area larger than Japan or Germany).

Historically, the principal business risk of declining biodiversity and ecosystem services has been to corporate reputations. Food producers and retailers have been criticised for the damage to ecosystems due to their sourcing of certain products or raw materials, such as fish and timber.

However, companies are beginning to realise how dependent their operations are on the critical services that these ecosystems provide. Continued degradation of global biodiversity and ecosystems could be an operational risk and, in certain locations, potentially jeopardise the long-term profitability and survival of some sectors, including forest products, agriculture and fisheries.