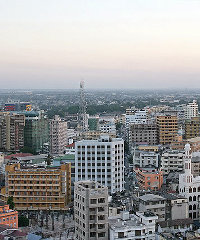 Dar es Salaam has been identified as a future commercial hotspot.

Foreign investors keen to tap the African growth story should look to the continent’s cities.

According to the United Nations, the number of African city dwellers is set to triple between 2010 and 2050 to 1.23 billion – more than the total number currently living on the continent.

But this also represents a great business opportunity, according to Frontier Strategy Group (FSG). The consultancy, headquartered in Washington, reckons that African cities offer enormous potential for companies keen on accessing a fast-growing middle class and hitherto neglected mass market – and prepared to take a risk.

But where to go? FSG has drawn up a list of ten cities to watch. Few will be surprised to see Lagos, Accra, Nairobi, Luanda, and Johannesburg among them. Eyebrows may rise, however, on seeing the likes of Addis Ababa, Kinshasa, Dar es Salaam, Ibadan, and Mombasa touted as future commercial hot spots.

FSG is particularly impressed by investment from drinks companies Diageo and Heineken in Addis Ababa (Ethiopia) and Kinshasa (DR Congo). Honda’s arrival in Tanzanian capital Dar es Salaam also gets the thumbs-up. Other companies considering taking the plunge might want to hurry. FSG also notes that Chinese companies are making inroads into cities across Africa.