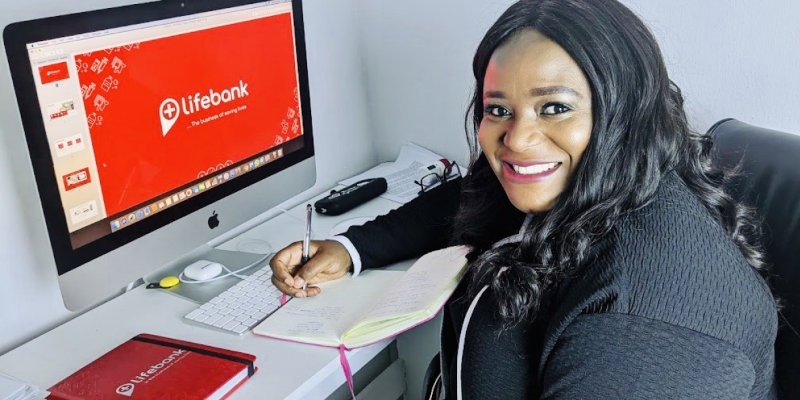 Thirty-four-year-old Temie Giwa-Tubosun just wanted to save lives through quick delivery of blood to patients in dire need. But now she is gaining fame and fortune from this simple act of mercy.

In 2016 Giwa-Tubosun founded LifeBank, a logistics company that collects blood from registered blood banks and delivers it to patients in hospitals.

In the past four years, the company has distributed about 26,000 products to more than 10,000 patients in nearly 700 hospitals in Nigeria; Giwa-Tubosun’s effort is now celebrated at home and abroad as an epitome of social entrepreneurship – using business to solve a major societal problem.

She has been featured in international media, including CNN, Bloomberg, The Guardian, and Newsweek. She has met some of the world’s richest persons, including Chinese billionaire and founder of Alibaba, Jack Ma, as well as Facebook founder, Mark Zuckerberg.

When Zuckerberg visited Nigeria in 2016, just after LifeBank launched, he said, “This is a thing [LifeBank] that needs to exist. If she can actually pull it off, she’ll show a model that will impact not just Lagos, not just Nigeria, but countries all around the world.”

Young, savvy and boisterous, the US-educated entrepreneur is on a mission to put a dent on the number of maternal deaths in her country.

LifeBank happened by happenstance. In February 2014, Giwa-Tubosun delivered a premature baby in a hospital in Minnesota, United States. She describes the delivery process as “complicated and harrowing”.

The experience led her to reflect on the plight of many other Nigerian women not so fortunate to travel abroad to have a baby.

“I knew how terrible I felt in the hospital bed, how it feels for other women in similar conditions. I decided I had to save lives,” she says in an interview with Africa Renewal, adding that she might have died of postpartum hemorrhage – the loss of blood – if she had delivered the baby in Nigeria.

“At that point, I knew I had to find this problem in my country and try to tackle it. I knew it would bring me joy and purpose.”

Actually, she didn’t need to find the problem; the problem stared her in the face. “Eight of 10 women who bleed to death [while giving birth] can be saved if blood is readily available,” she emphasises.

The Nigerian National Blood Transfusion Service frequently raises alarm about the declining number of blood donors in the country. For example, in Lagos where LifeBank is headquartered, only 80,000 pints (or 43 per cent) of the 185,000 pints of blood needed annually are collected.

LifeBank easily carved out its niche. Patients who need blood or hospitals, especially in rural areas, have no access to blood banks; blood banks are looking for such patients and hospitals. LifeBank connects the two, providing the right information on the type and safety of blood and oxygen and ensuring fast deliveries.

“Orders are a seamless process,” Giwa-Tubosun explains. Patients or doctors make orders through LifeBank’s website or app or simply by making a phone call to the company. The company then immediately contacts the blood bank nearest to the patient, and the delivery operation is activated.

At times it’s by motorbike that meanders through the snarling road traffic in densely populated cities such as Lagos; at other times it’s a drone flying overhead to drop off the package; in riverine areas, boats are used to ensure fast deliveries.

The company uses Google Maps to calculate and monitor routes between the locations of blood banks, delivery vehicles and hospitals.

“We work with 100 blood banks across Nigeria. We have a database of their inventory,” she says.

Her ambitious expansion plan is on course, thanks in part to the $250,000 first prize she was awarded in 2019 by the African Netpreneur Prize Initiative that was organised by the Jack Ma Foundation.

Currently operating in the Nigerian states of Lagos, Oyo, Kano, Rivers, and the capital Abuja, Giwa-Tubosun hopes to soon move into other cities and towns in Nigeria’s northeast.

At the same time, she has her sight set on other African countries. Last year, she partnered with the Information Network Security Agency of the Ethiopian government to successfully test drones pick up blood from blood banks and deliver to hospitals.

She hopes to find a space in Ethiopia in the future. “But by the time this interview is published,” she enthuses, “we will be in Kenya delivering blood and oxygen to hospitals, to patients.

“We have the same problem in most of Africa – indeed throughout the world. There is a demand for critical supplies of blood and oxygen, at the right place at the right time.”

But it has not been smooth sailing for Giwa-Tubosun who continues to juggle managing a fast-growing business in a tough business environment and looking after her six-year-old child while being a wife.

“The support of my family is key to our success,” she acknowledges.

Nigeria’s business environment is not the friendliest. She attests, “If you can build a business in Lagos, you can do it anywhere else. It would be a cakewalk.”

She has faced challenges with licensing, an opaque regulatory environment, the lack of financing, poor infrastructure – water, roads, electricity – and so on. “Bad roads damage our vehicles. We have to have a standby generator for electricity.”

Yet she says, “Nigeria has a lot of promise. I have to do my part. And I will tell other young entrepreneurs to take a risk, to engage in scalable, smart and efficient operations. The market is huge.”

Do Nigerian businesswomen face other unique challenges? “Women doing uncommon things will face challenges,” she shrugs, matter-of-factly. “It is an incredibly patriarchal society. But I like doing the hard things.”