Four years ago Dorothy Ghettuba quit her job at a venture capital firm in Canada and moved back to Kenya to follow her passion for TV production. With no education or experience in the field, the only thing Ghettuba was armed with was her determination to make it. 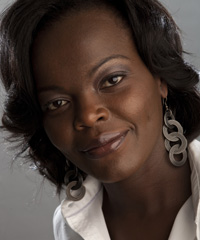 Dorothy Ghettuba is the founder and CEO of Spielworks Media.

“There was no plan B. When I was packing up my stuff and leaving a good job, and leaving a comfortable life in a place where people have first world problems of ‘can I have the strawberry or the vanilla one’… failure was not an option,” she said.

Ghettuba is the founder and CEO of Spielworks Media, one of Kenya’s leading production houses. Some of its TV shows include Block D, Lies that Bind, Higher Learning, Saints, Ladies 1st and civic education drama series Know Your Constitution, which have aired on TV stations both in Kenya and outside the country.

Ghettuba told How we made it in Africa that she has always had a passion for acting but could not pursue it as a career after high school because it was not financially sustainable. She went on to study communications and political science at Andrews University in Michigan, United States.

When she visited Kenya for a friend’s wedding, Ghettuba was amazed by how a local TV station had risen from the bottom to become the most popular station because it aired local content. “I saw an opportunity to create quality content,” said Ghettuba, who is also an actor, singer and writer for film and television.

Although she went back to Canada after the wedding, Ghettuba thought hard about the opportunity she had witnessed. “I had to decide; do I want to stay in Canada and do what has already been done and [be] this small fish in a big sea or do I want to come to Africa?”

Eventually she decided her best bet was on Africa and Ghettuba set up Spielworks Media while still in Canada. “I had always known I was not coming home to be employed,” she added.

Just months after turning 30, Ghettuba packed her bags and moved to Kenya.

“It was tough because I had never done this before,” she explained. “It is always risky; packing and leaving everything. I left Kenya when I was 18. I had never lived in Kenya as an adult. Coming back home, for me, was a new experience. But I am a risk taker. I am very daring.”

Despite the challenges, Ghettuba was determined to make it. She joined a local TV show as a production manager and learnt on the job. “It was baptism by fire. It was so hard. Mistakes were made, lessons were learnt, but that is what it is. From the producers I learnt how not to produce. I am forever grateful… I would not swop that experience for anything whatsoever,” she said.

After six months, she decided to begin working on her own production. She came up with an idea and presented it to a network executive who loved it, but demanded to see a pilot. However, Ghettuba did not have money to finance the pilot and the network executive was not willing to write a cheque just yet.

Drawing from her knowledge and experience in venture capital financing, Ghettuba approached her family and friends and managed to secure some money.

“I remembered [that] people don’t buy into an idea, they buy into people,” said Ghettuba. “Money came from people who thought I was nuts, but they also wanted to support my dreams. When you want to start a business and you really believe in it, look at your inner circle [for financing].”

Ghettuba took the pilot to the network executive who wanted to pay half the price she had asked for. She knocked on more doors and eventually a local station picked up the drama series Block D. That opened doors for more productions.

“We have come a long way,” she added. “We are now going to be shooting four drama series and five talk shows simultaneously. That is very exciting. We are really pumping content because content is the new petroleum.”