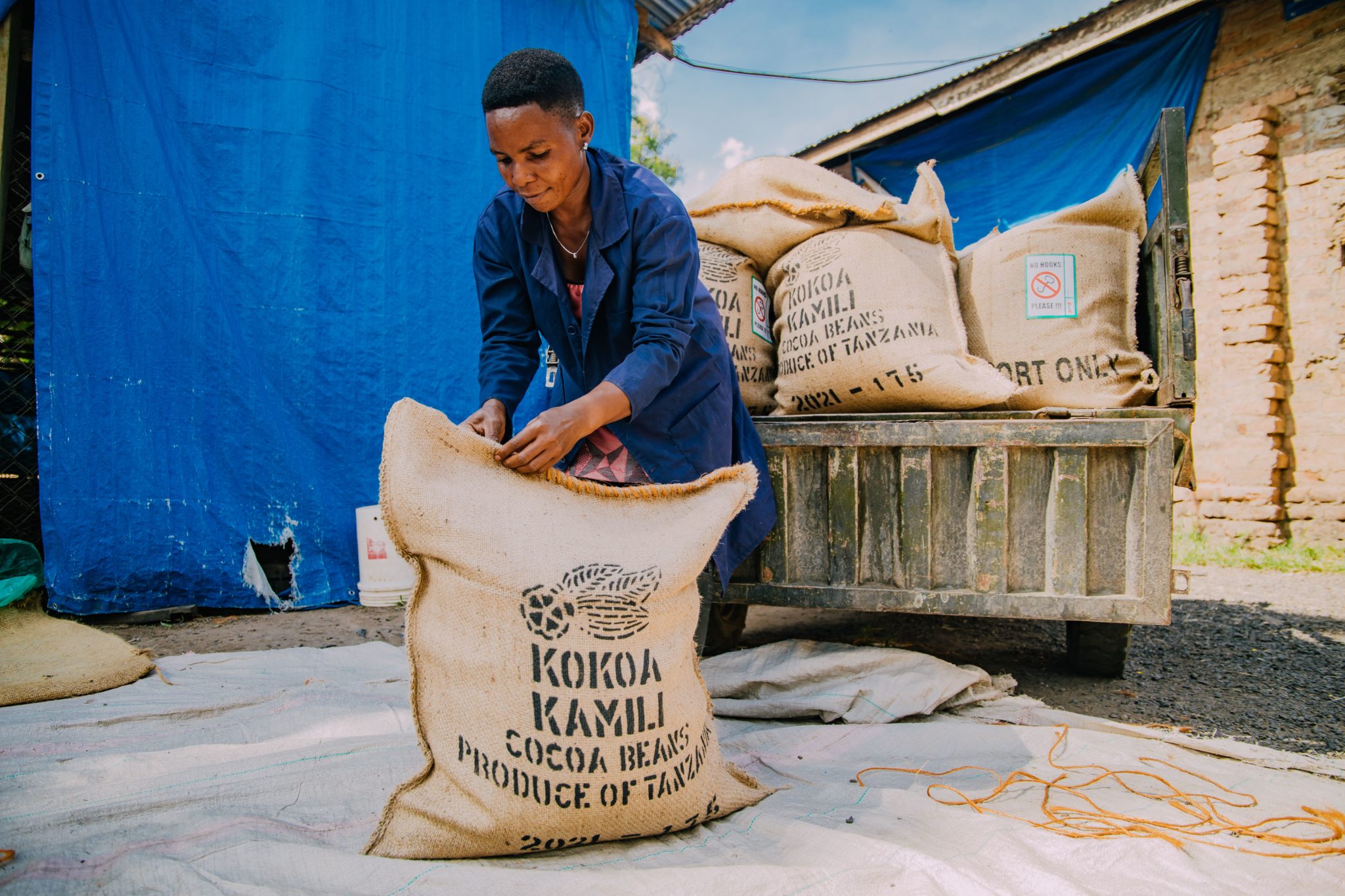 Tapping into a niche but growing market

Bindra is somewhat uncomfortable when someone mentions the company has ‘made it’. He is well aware that Kokoa Kamili has a long way to go and that it will always operate in a niche market. However, this market is enjoying strong growth in demand. Various research reports predict growth of between 8.96% and 9.20% per annum over the coming five years.

Back in 2012, two things happened for Bindra. Firstly, he saw how the premium chocolate market – mostly in the US at the time – was showing signs of accelerated growth in the way specialty coffee had over the previous decades. The second was, through his earlier work on a development project for the cocoa supply chain, the realisation that much of the unique flavour and qualities of Tanzanian cocoa were being lost owing to inadequate post-harvest and fermentation processes.

The terroir of the cocoa bean is crucial: the soil, the climate, etc. Bindra and LoBue knew Tanzania boasts excellent beans in terms of genetics and terroir; yet, after poor fermentation processes, it was all delivered to large commodity buyers who sold into the supply chain of commercial chocolate makers where only about 10% of the finished product is actually cocoa.

“Craft chocolatiers were starting to make dark chocolate with a minimum of 70% cocoa and few other ingredients. If two-thirds of the product is made up of a single ingredient, that ingredient better taste good,” says Bindra.

The Kokoa Kamili team realised that to harness the flavour potential of the Tanzanian cocoa bean, they would need to shorten the supply chain and buy directly from the farmers. They would also need to control as much of the post-harvest processes as possible.

The co-founders spent a couple of weeks driving through the cocoa-producing parts of the country, dedicating hours to speak to farmers under mango trees and explain what they were trying to do. “We quickly decided on the Kilombero Valley (in central Tanzania) for our base and set up a facility from where to start the official outreach to farmers.”

Winning over supply from farmers who sold to large commodity buyers was achieved fairly quickly through a few targeted interventions from the company.

From the beginning, Kokoa Kambili committed to paying at least 10% more than the farmers would usually receive from other buyers. Paying premium prices meant the farmers were eager to meet the standards the company put in place, which helped with the quality supply of flavourful beans. In reality, the company has never paid less than a 20% premium and, at the end of the latest season, it was as high as 51%.

The co-founders acknowledged they had to win the trust of the farmers if they wanted to establish real traceability and direct trade. Kamili in Swahili means ‘exact’, ‘absolute’ or ‘precise’. It was deliberately chosen as part of the brand name to not only convey a message to buyers, but the farmers as well.

“In the past, many farmers would weigh their cocoa on scales at home and then, once it arrived at the commodity buyer, for some reason, it would weigh less. The farmers had a level of distrust in buyers,” says Bindra. “We invite the farmers to verify our scales and we make sure they are calibrated regularly.”

The company also pays cash at the point of collection. “Cash is king here in Tanzania, and it makes sense for primary producers who need cash flow. If you cannot pay in cash, the farmers would very readily sell for a much lower price just to secure the cash.”

These steps ensured success. “Within the first months, farmers were seeing the higher incomes of their neighbours and family members who were supplying to us, so our network grew quickly.” 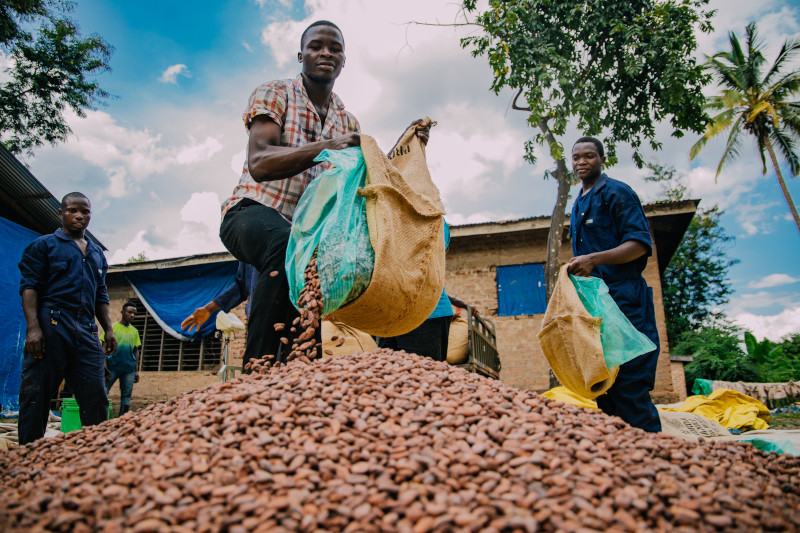 The fermentation and drying process accounts for up to 70% of cocoa’s flavour development, according to Bindra.

Bindra realised if the company could get the fermentation and drying correct, it could add a unique bean with a different flavour profile to the market, something that would draw the attention of the high-end chocolate makers. To achieve this, Kokoa Kamili needed a fermentation facility close by in Kilombero.

“We drove to the village where we knew we wanted to set up the facility and found a large building we thought would work. It turned out to be an old dance hall but it was perfect for our operations. The first few months, particularly on Sundays, gentlemen would arrive to continue their weekend beer drinking and we would have to explain it was no longer a bar,” he laughs.

Using their savings, the co-founders put the required fermentation system in place: stacked large boxes where the beans go through both the anaerobic and aerobic fermentation processes, and are regularly turned and stirred to achieve the required flavour profile.

“Over the years, we have added neighbouring plots under lease for our facility as we grew. We recently bought a piece of land a few kilometres down the road and we will design it exactly as we want,” says Bindra.

Kokoa Kamili sources beans from roughly 4,500 farmers; 1,300 of them are organically certified. The latter provides about 90% of the total harvest volume to the company.

As origin traceability is important for high-end, fine cocoa chocolate makers, Kokoa Kamili issued each of these farmers with a registration number. This number is attached to the cocoa batch upon purchase and follows it all the way through to the container when it is shipped. A buyer in the US is able to see a list of all the farmers who contributed to its specific shipment. More and more customers use this as part of their marketing strategy or storytelling that accompanies the premium chocolate purchase.

“They won’t publish the list of farmers on the wrapper but we’ve had buyers who ask us for the list to validate our claims of traceability and transparency. Some even use our name on their wrappers as they tap into the strength of the story,” reveals Bindra. 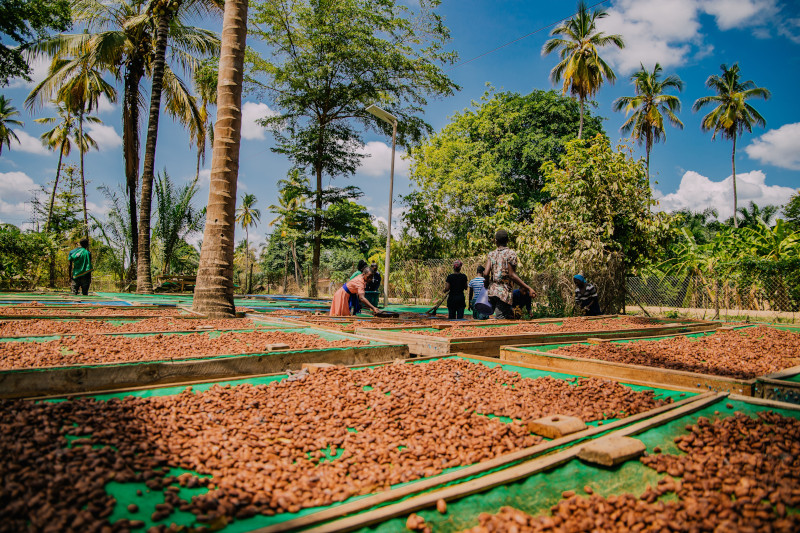 Drying of cocoa beans at Kokoa Kamili’s facility in Tanzania.

For the first year, Kokoa Kamili consisted of just Bindra and LoBue who bought the cocoa pods, fermented and dried them, arranged for storage, and steadily built supply to fill a container for export. “Cocoa is great. If you can keep it in the right conditions – dry and free of pests – you can keep it for years.”

As the first year passed, the co-founders realised they urgently needed to secure a customer for the first consignment. “Farmers could see it was a good deal to trade with us. What we didn’t have lined up from the start, was a buyer. In hindsight, I would probably do that differently,” admits Bindra.

In trying to find a customer, Bindra approached potential buyers directly. He showed up, unsolicited, with a bag of beans at the door of one of these premium cocoa bean buyers in the US, Mast Brothers artisanal chocolate makers. “After some conversation and sampling, they agreed to buy the container outright from us,” says Bindra. “We were very lucky and we have been working with them ever since.”

Kokoa Kamili’s volumes have grown from one container in 2013 to where it will export about 20 containers of cocoa this year (the cocoa in one container can make 125,000 chocolate bars).

Two years into production, Kokoa Kamili partnered with a premium specialty cocoa bean distributor from the US. “That was a key moment for us. They took a third of a container in 2015 and this year, they are taking five. They were a small operation in the beginning and it has been good to see them grow alongside us.”

The team makes sure they are visible at relevant exhibitions and expos to establish a name for their cocoa.

“At our first trade show in 2015, in Amsterdam, we only had a tiny booth. The last time we were at that same show, pre-Covid-19, my co-founder was a panellist on some of the stages, giving presentations. That was a cool moment to see how far we’ve come,” Bindra recalls.

The company has no plans to go into the production of premium chocolate itself. Bindra believes Kokoa Kamili’s sweet spot is in supplying beans to companies that have the marketing and brand know-how to make sales of finished chocolate bars a success.

“Côte d’Ivoire produces about two million tonnes of cocoa a year and Tanzania produces just 10,000 tonnes. So Tanzania is a drop in the ocean of the global cocoa market and we are a tiny part of that Tanzanian market. In terms of the high-end, ultra-premium, ultra-speciality market, however, we are one of the larger suppliers,” says Bindra.