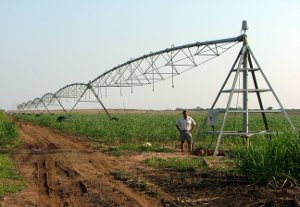 He cultivates sugar cane, bananas and citrus fruit on his farm close to Komatipoort in South Africa’s Mpumalanga Province.

Van der Westhuizen also plans to use Senter 360’s systems to irrigate a 70 ha banana plantation. Senter 360’s agent in the area has already made sure that the company will be able to provide a special high profile centre pivot with a 5,3m clearance to irrigate the tall banana plants. Van der Westhuizen says the fact that Senter 360 is willing to go the extra mile for its clients is why he will continue to use the company’s products. “Senter 360 is prepared to build long-term relationships with its clients, while producing an excellent product and there is no reason why we have to play second fiddle to the American products!”

And Van der Westhuizen knows what he is saying as he was previously involved with the erection of centre pivots for other farmers before he ventured into full time farming himself. He mentioned that he would not degrade any other product, but when he had to buy his own centre pivots, Senter 360 was the logical choice and also provided the best value for money.

Centre pivot irrigation offers accurate water distribution at low pressure. It is also the most cost-effective way of irrigating on a large scale. The cost of each centre pivot tower is the same (only differing with the difference in pipe diameter) whether you have a small or a large system. With each additional tower you add, the radius of the circle is extended and the area under irrigation increases exponentially to the outside making it cheaper per hectare as it becomes larger.

By farmers for farmers

Designed and built in South Africa since 1994, Senter 360 centre pivots are known for its superior construction quality and strength above industry standards and the company is renowned for its excellent sales and after-sales service. Over the past few years, Senter 360 has also broadened its focus to include the entire African continent.

Senter 360 has interests in commercial farming and knows exactly what is important when it comes to centre pivots: reliability and value for money.

One of the main factors that sets Senter 360 apart from its competitors is that the company uses pipe trussing, which makes the structure much stronger and lighter. Another advantage would be the I-Wob sprinklers that have a perfectly engineered droplet size resulting in more water in the soil.

In addition, Senter 360 has introduced a number of other features that make a major difference. For example, the company has patented technology to keep the last sprinkler constantly clean, thus maintaining the full irrigation application on the outer hectares of the centre pivot, normally prone to under-irrigation.

It doesn’t matter where in the continent you are farming, Senter 360 will offer you the same world-class products and service that has kept the company growing for close to two decades.

To find out how Senter 360’s centre pivot irrigation systems can benefit your business, contact the company at: