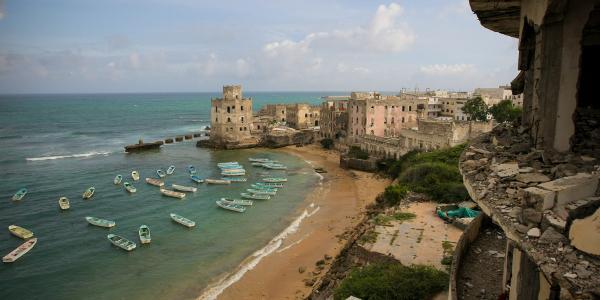 View of Mogadishu fishing harbour from the Aruba Hotel.

The mere mention of Mogadishu, the Somali capital, conjures up disturbing images: pockmarked shells of roofless buildings that evoke memories of the ruins of Dresden (Germany) in the waning days of World War II. Or the sound of pickup trucks equipped with heavy machine guns and manned by khat-chewing militiamen who race through rubble-strewn streets amid makeshift camps of destitute families displaced by the chaos and carnage of a civil war that has been raging for decades.

I lived through all that. I remember vividly the day when the lives of us Mogadishu residents began to turn upside down. I was a 16-year-old high school student taking a geography test when I heard the thudding sound of artillery shells for the first time in my life on 27 January 1991. We were to learn later that the country’s longtime military dictator Maj. Gen. Mohamed Siad Barre had been overthrown.

The fall of Siad Barre triggered a bloody struggle for control over Mogadishu among clan-based militias that would go on for years. It changed my life in so many ways: The staccato bursts of small-arms fire became the aural backdrop of my adolescence and the early years of my adulthood. A nephew was kidnapped and later killed because he belonged to the wrong clan in the eyes of his abductors.

Once renowned for the wide boulevards and Italianate colonial architecture that made it one of Africa’s most beautiful capitals, Mogadishu was divided and shared among rival warlords. Government-built schools and hospitals became prime targets for looters bent on destroying all remaining vestiges of Siad Barre’s 22-year rule.

Back from the brink

Today, a new Mogadishu is rising from Somalia’s turbulent past. From the time that Al-Shabaab militants pulled out of the city in August 2011, the Somali capital has been undergoing an economic renaissance that few would have conceived of only five years ago.

A vibrant night life has returned to the streets of the city’s once-fashionable Shingaani district, and families and young couples have reclaimed Lido Beach as their weekend playground. A peace garden in the heart of Mogadishu boasts cafés, two football fields and park benches where Somalis can read local newspapers or exchange the latest political gossip.

Mogadishu is in recovery mode. “The city is like a patient who was in a deep coma, and then suddenly he moves his fingers and opens his eyes. Now he is moving his limbs and unfolding his legs,” says Dr Mohamed Yusuf, director of Madina Hospital, which was reduced to a camp for internally displaced persons in the 1990s at the height of the civil war.

The outside world is beginning to notice. In a recent survey of the world’s fastest-growing cities with a population of at least one million, the US-based consulting firm Demographia ranked Mogadishu second, behind only the Indonesian city of Batam. Demographia estimated Mogadishu’s annual growth rate at 6.9%, fueled in large part by the return of growing numbers of diaspora Somalis who have come home to reconnect with their roots and explore investment opportunities following improvements in the security situation.

One of the glitzier showcases of the new Mogadishu is an upmarket housing estate located 7 km outside the capital, which opened its gates in August 2015. The Daru Salaam suburb will consist of 500 houses when it is completed. About 50 dwellings, with prices starting at around US$70,000, had been completed by the end of 2015. The initial phase of construction cost an estimated $20m; a local bank has provided the financing for the development of Daru Salaam, which means “House of Peace.”

The gateway for most foreigners entering Mogadishu is the shiny terminal building of the city’s Aden Adde International Airport. Refurbished by a Turkish company that has a 15-year contract to manage the airport, the terminal building was inaugurated in January 2015 in a ceremony attended by Turkey’s President Recep Tayyip Erdogan.

I know this city of over two million people still has a long way to go before it can fully regain its past glory. Dozens of war-scarred buildings still remind us of the fighting that engulfed the city for years. The Somali capital continues to make the headlines for all the wrong reasons: two of Mogadishu’s better-known hotels were attacked by Al-Shabaab extremists in July and November 2015, and a Lido Beach restaurant and the city’s peace garden were targeted by the group in January and February, respectively. Many high-profile politicians and businessmen routinely arrive at meetings in the company of heavily armed bodyguards. However, there is hope that things are turning around.

A stroll through some of its once-devastated districts reveals how much Mogadishu has changed. The central business district is once again a beehive of commercial activity. Some of the street scenes along the city’s main boulevard, Maka-Al-Mukarama, could match any in Dar es Salaam in Tanzania or Addis Ababa in Ethiopia. On some mornings I can see foreign-flagged container ships offshore on the distant horizon, waiting their turn in the blue waters of the Indian Ocean to enter Mogadishu’s main seaport.

The rooftop of one of the tallest buildings in Mogadishu affords a bird’s-eye view of the city, with some of its best-known landmarks under my feet: the Turkish hospital, the Jazeera Palace Hotel, the offices of the Hormuud telecommunications company, and the Konis football stadium.

As I watch a modern jet take off from the seaside runway of Aden Adde International Airport, I look into the future and see a thriving Mogadishu that embodies the resilient spirit of its inhabitants. That is the city that my generation of Somalis will hopefully bequeath to our children and grandchildren.

This article was originally published by Africa Renewal