In Johannesburg, South Africa, there are a small but growing number of shared office spaces in which sole proprietors and small businesses rent a desk and other services. For small business owners and startup companies, this route not only provides cheaper overhead for workspace, but it also helps entrepreneurs network. 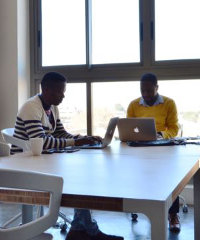 The OPEN collaborative work space is on the fourth floor of a building in an artsy, up and coming area just south of downtown Johannesburg, in a neighbourhood called Maboneng.

Inside, it is a large open space, with meeting rooms and work rooms off to the side. There are dozens of tables and chairs set up as desks, couches for meetings, floor-to-ceiling windows with views of the city outside, a full coffee bar with an on-site barista, and some recreational activities to take a break.

“We are standing on a custom built nine-hole putting green. The thought behind it was everyone thinks business is done on a golf course. We could not build a golf course in Maboneng, unfortunately, so we built the putting green … It is a versatile space, and it also gives a little break away for members and people visiting the space to come and putt along the green, which is quite awesome,” said Westleigh Wilkinson.

Wilkinson manages the site and also runs his event planning business from OPEN.

“OPEN’s philosophy is very much based on collaboration and innovation through shared knowledge … We have got a lot of great stories where businesses have grown into the main change [building] and Maboneng as a whole,” he added.

There are about 30 members of OPEN, mostly small startup companies in the technology field, although there are also satellite offices for people who run logistics for manufacturing companies and one member who runs an online casino.

One of the co-founders of OPEN, Paul Keursten, says it spawned from three ideas. First, he says, the founders wanted to cater to people who are self-employed or work part time.

“The other line of thinking is that so many people go to their workplace not feeling that it’s a great place to be … Most offices are dull, uninspiring … Why do not you make it a place that you want to go to? … Another line of thinking, is that we need innovation to happen. Innovation happens in a place where you meet people, where you think of ideas, it happens around the coffee, it happens on accidental meetings … We wanted to create a place where that can happen,” he said.

There are a growing number of spaces like OPEN in Johannesburg. But there are also coffee shops and restaurants attempting to fill that void for those working the virtual world.

The IT Corner in the Johannesburg suburb of Melville is a coffee shop that doubles as an office for many in the neighbourhood.

Abdul Kader Bouredji, the co-owner, opened the shop in 2010.

“That’s my idea to provide, printer, fax facilities, copies, scanning, offices, for example some ladies here have an office, but don’t want to sit between four doors, so they’d rather come here. They see new faces but they do their work,” he said.

“This for me is an ideal working space, because not only do I get to see various people all in one go often, but I also get to know what’s going on in the neighbourhood … Before I was a councilor I had my own company and working as an entrepreneur can be incredibly lonely,” she said.

Such spaces also provide networking opportunities. Luthando Mfabe works for a company called Digital Voodoo, which does digital marketing. The company is headquartered in the OPEN space – where he says he’s come across many new opportunities.

“You do get a lot of exposure. If someone wants a web designer, somebody knows us and they refer us to that person. We do get a lot of business like from just collaborating or just sharing the space,” he said.

He’s collaborated with another OPEN member on advertising campaigns which they are currently pitching to several international clients. Mfabe says he’s enjoyed working in the space, though sometimes it can be tough not having a door to close when he’s crashing on a project.

“That’s the only thing, but it’s a negative sometimes, sometimes it’s a positive,” he said.

Overall, he says, the positives far outweigh the negatives. – VOA