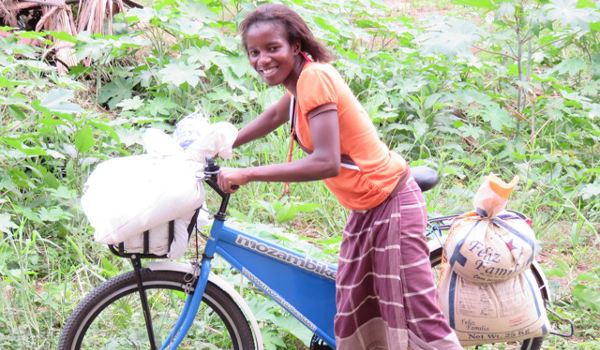 Mozambikes make use of an innovative business model where advertisers can effectively buy advertising space on the bikes, subsidising the cost for low income consumers.

Mozambikes is a for-profit social venture based in Maputo, Mozambique. Founded by Lauren Thomas and Rui Mesquita, the initiative develops affordable bicycles to be used in rural areas where no other form of transport is available.

It make use of an innovative business model where advertisers can effectively buy advertising space on the bikes, subsidising the cost for low income consumers.

Another model allows the bikes to be purchased directly by an organisation who can brand it with their logo and colours. The organisation then distributes the bikes independently, usually as a form of corporate social responsibility (CSR) or promotional marketing. Both models allow the bikes to become a form of mobile advertising, penetrating hard-to-reach rural markets.

The bikes are assembled locally by Mozambike employees, who also work on bicycle-related innovations such as an accompanying trailer and a bicycle ambulance.

Thomas, a former investment banker from New York, told How we made it in Africa about the business model and the impact it has on rural families.

1. How did you finance Mozambikes?

It began as an idea, though we knew it had the potential to have a tremendous impact on the lives of rural Mozambicans. However, the first step was to import a container of bicycles and test the market. Given the risk implicit at such an early stage, Mozambikes started entirely with shareholder funding.

No impact or patient capital investors were present in Mozambique, or willing to give funds for an idea. Even so, hardly any investors present in East Africa and South Africa venture into Mozambique, although we have identified a few and are moving forward in discussions for both a debt and equity raise. We received some financing through grants from government organisations, and though they take quite a while to achieve, we are thrilled to have been able to access the support. We have received funding for specific projects from USAID (United States), SIDA (Sweden) and the German Embassy in Maputo.

The two biggest needs we have right now are firstly to build a sales team and secondly to develop and launch a robust communications strategy for both our local and international audience. We feel we are making a big difference on the ground but need to better communicate those successes in order to get more participation from others around the world. People love bicycles, and there are a growing numbers of philanthropic organisations looking to assist in interesting projects around the world. We want these people to take a look at Mozambikes.

Mozambikes is growing well, but without a capital raise to build our sales and awareness, we will not be able to implement many of the new initiatives that we think will make such a tremendous difference for local Mozambicans – partnerships to get bicycles in hospitals and schools, launching a micro-loan product, developing other related projects, building distribution throughout the country, and more. Our biggest fear is that we continue to sit with these ideas and do not have the manpower to launch them.

Our most successful marketing has been our 7,000 bicycles on the roads in the country. When a company sees Mozambikes branded with another organisation, they want to know – who made those? Therefore, word of mouth has been very effective in getting sales over the last few years, now that we have a presence in the market. Mozambique is still a traditional market and we have also been successful with aggressive direct marketing – emails and phone calls to arrange meetings with target clients.

It was definitely our first donation event. The branded bicycles sustain the business, but the donations are what warm our hearts the most. Our first donation event gave bicycles to 20 rural women in southern Mozambique. When we arrived, they began to clap and sing, and when they received the bicycles they were crying and singing. A bicycle may seem like such a small item to many, but it is quite literally life-changing in rural Africa. It means access to clean water. It means mothers can bring their babies to the clinic when they are sick. It means that they can return home from their farming plots in time to make their children dinner at night.

6. What has been the biggest mistake you’ve made with Mozambikes, and what have you learnt from it?

Our biggest mistake has probably been the fact that we have never had a good communications plan to showcase our work. We have always been extremely conscious of minimising our costs in order to put every dollar towards the mission. We are very careful not to be an organisation that takes away from the mission to pay “First World” salaries. At the same time, now that we have proven our model and are poised for significant growth, we believe that allocating some funding towards communications will enable us to bring in new sales and donations – which of course will have a compound effect on scaling the mission – changing lives with bicycles.