The world over, beer is a testosterone-fuelled industry. Advertisements for the globe’s most popular alcoholic beverage are almost exclusively aimed at men. But a group of women in Johannesburg are dismantling masculine notions associated with beer and have opened one of Africa’s first craft beer breweries that’s owned and operated by women. And their pints are winning acclaim. 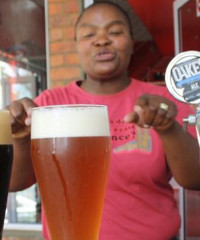 Brewer Happy Sekanka with some of her unique craft beers inside Oakes Brew House in Johannesburg.

Sophisticated guitar music washes over patrons seated at tables under tall trees at Oakes Brew House in Modderfontein, east of Johannesburg. Bearded bikers in leather, to women in pretty summer dresses, are enjoying litres of beer – beer brewed by a young woman originally from a township in South Africa’s northern Limpopo province.

Inside the brewery, surrounded by silver kegs, Happy Sekanka says she’s “in love” with the art of making beer.

“I just can’t explain the feeling; it’s just phenomenal; I love every minute of it,” she says.

Sekanka credits Delia Bailey, one of the owners of Oakes Brewery and a microbiologist, for teaching her how to make beer. But she’s done a lot of research herself into creating beers that are much richer in flavour than their commercial counterparts.

“For me when I taste the stout you get a very strong coffee and dark chocolate flavour; an almost burnt taste but not a bitter burnt taste,” she says.

Despite all the exotic ingredients she uses, Sekanka’s convinced her beer’s special because she makes it with pure spring water.

The brewer’s very aware that it’s predominantly men who make craft beer, and men who drink it.

But Sekanka says South African male brewers have mostly supported her, eager to share their knowledge – but gender stereotypes persist.

“Some of them they don’t believe me,” she says. “They ask me, ‘Where is the brewer?’ Then I tell them, ‘I’m the brewer.’ Then they go like, ‘No ways!’ The fact also – I’m just going to say this – is because I’m black, and brewing this craft beer, they just don’t understand why a black lady is brewing the beer.”

Sekanka says she reminds “prejudiced” men that in African culture, the task of making traditional maize and sorghum beer is women’s alone, so what’s so strange about women making craft beer?

Peter and Martin Jacoby, who bill themselves as a father and son beer-drinking team, are big fans of Oakes beers.

“Power to the girls,” says Peter.

While Martin echoes his sentiment, “Good for the girls, hey. As long as the beer tastes good… ”

While the Oakes Brew House has many male fans, Sekanka emphasises that many of her customers are now women.

One of her regulars is Raven Slater. As she sips a wheat beer, Slater says she’s proud of South Africa’s “all-girl” brewery.

“I think it puts kind of a stake in the ground and says that women have got something to prove, maybe, and have the opportunity now to actually say, ‘We can also brew beer and we enjoy beer too and it’s okay as a woman to enjoy beer; it’s not just for the men,’” she said.