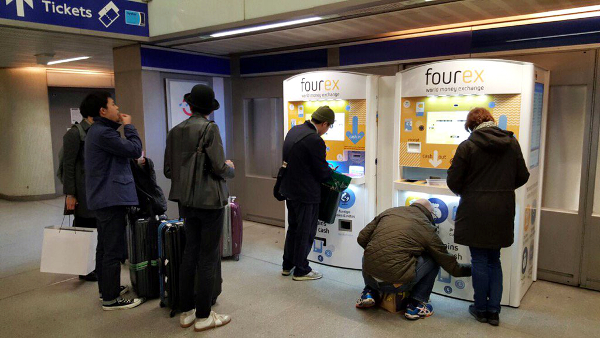 Two Fourex kiosks are situated in King’s Cross station in London. It is estimated that there is about £3.2bn (about US$4.6bn) of unused, foreign coins in the UK alone, and this is increasing by around £900m ($1.3m) a year.

Jeff Paterson and Oliver du Toit are the two South African innovators behind Fourex, a self-service machine that can do what a bureau de change will not: exchange foreign coins.

The technology looks similar to a vending machine and allows you to drop many different coins (as well as notes) from 150 currencies around the world down a chute. The Fourex software quickly identifies currencies and allows the user to exchange it into cash – currently US dollars, pounds and euros. It charges competitive exchange rates with no added fees or commissions, and can process 10 coins per second without any need for users to separate different currencies. The Fourex kiosk also accepts and exchanges old European currencies, as well as other out-of-circulation notes.

The entrepreneurs, currently based in the UK, won Virgin Media’s ‘Pitch to Rich 2015’ competition for their innovation in the ‘New Things’ category – after pitching directly to business mogul and Virgin Group founder, Richard Branson.

The idea was born out of the founders’ own frustrations. The duo met while working in building construction for a Middle Eastern airline. Both had travelled extensively and it wasn’t long before they had collected jars full of different foreign coins. At one point it was estimated Du Toit was holding around US$1,000 worth of foreign coins – from Indian rupees to Thai baht to Australian dollars. However, currency exchange bureaus didn’t want to take their coins.

“Even with the small-value notes they would exchange – they wanted to charge me $2 to get rid of a 20 Thai baht note ($0.57) and it was actually more than the value of the note itself,” Paterson told How we made it in Africa.

“Plus the exchange rate they were offering me on everything else was terrible. So I had a jar of money worth a couple of hundred pounds or euros that I could get probably £50 worth back, and I thought there must be an opportunity here.”

The two imagined a machine that could quickly and conveniently convert foreign coins into other currencies at competitive exchange rates. They approached a number of the large technology companies, but were quoted millions for both the software’s and hardware’s development.

“And of course we didn’t have that sort of money. So we kind of went back to the drawing board and did things a bit differently. We worked with a couple of software engineers to do it,” added Paterson.

While it was simple enough to develop a machine that could recognise one coin at a time, the tech entrepreneurs knew this would not be good enough.

“The problem is if you come with a jar of 500 coins, you are not prepared to sit there for an hour while you put one coin in at a time. It has got to be really quick.”

They wanted a solution which could register many different foreign coins at once – both quickly and accurately – and it took three years to perfect the technology. Not only did they have to take multiple images of many different coins from around the world, but also the different variants of the same coin.

“Like in the UK there are multiple different £1 coins. So if the queen has a birthday, they issue a 2016 pound coin and they issue 10 million of them… And then if you go into the US, a quarter in Alabama in 1980 is not the same as a quarter in New York State in 1980 – they are different. So there are multiples of the same coin for a single currency.”

Over the years they collected about 30,000 different coins from around the world. They then had to take photos of around 100 variants of each coin – to cater for those that are worn and old or new and shiny. Furthermore, they had to cross-reference each to other propriety items to protect themselves against accepting counterfeit coins.

Both travelled extensively around the world to different coin dealers, and in the end their database contained around 3.5 million images, with more and more still being added as currencies change.

“So when people tell me someone is going to copy our idea, I always say: ‘Well, good luck to them with that. Let me know when they are done because it is not an easy task.’”

For years Paterson and Du Toit self-funded the development of Fourex using the proceeds from their own construction company, and invested upwards of £1.5m (about $2.1m). They struggled to find investment and eventually sold their cars and relied on their wives to support them.

“Then this time last year we were probably on the last of our money – and we were exhausted. We had been at this for four years and we stopped our other company about a year before, so we had no income,” recalled Paterson.

“We just couldn’t get investment in the company, so we decided to crowdfund. We launched our crowdfunding campaign… Everybody thought it was a fantastic idea, they were more than happy to invest small amounts… In five days we reached our target and we over-funded by 250% in 10. So we ended raising about £700,000 (almost $1m).”

Soon after, Paterson saw a LinkedIn post advertising Richard Branson’s ‘Pitch to Rich’ competition. He entered Fourex and managed to beat over 2,500 companies to take home the winning prize and £50,000 (about $71,000). 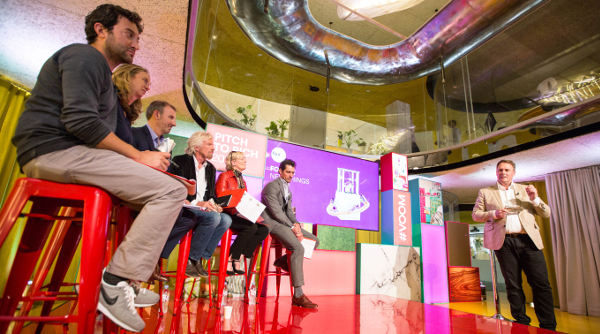 Jeff Paterson pitching to a panel of judges, including Richard Branson, at the ‘Pitch to Rich’ competition.

Not only does the Fourex machine take the coins and notes that many exchange bureaus will not, but it also offers much more competitive exchange rates. But how can it do what others can’t?

For starters, Fourex’s operational costs are minimal. Paterson said in 2015 a foreign exchange bureau in London’s Heathrow Airport had to pay about £10m ($14,2m) to operate from its 20m² space. On top of that, these bureaus have to employ around three or four staff per shift. However, Fourex’s machine only takes up 1m² and requires no staff to be operated. “So those savings are then passed onto the customer,” explains Paterson.

He believes the reason why exchange bureaus typically do not take coins is because it is difficult to manually work out where each coin has come from, and then exchange them at a rate that is worth the time and effort.

But Fourex’s software can identify numerous different coins in a fraction of a second, and exchange them almost instantaneously too. Once full, the machines are emptied and the coins are taken back to the Fourex offices to be separated using similar currency-sorting technology. The coins are then sold on to dealers.

The Fourex solution also accepts a number of African currencies that many exchange bureaus shy away from.

“For example, you can’t sell a Botswanan pula to a foreign exchange in London because nobody wants it… which is insane because it is worth money. So that’s where we find our niche is, and we charge a slightly higher margin on that because it is not accepted anywhere else.”

He added that currency risk is not a huge concern for the company’s profits.

“Our margins are fixed at a percentage. So if the markets move a quarter of a percent, our rates move along with that.

“And also our risk is spread over 150 currencies, so what we lose on one we kind of figure we might make up in another. So because we are trading 150 currencies it is such a small percentage lost that we don’t think it is worth spending too much time worrying about it. We [exchange] large volumes – that’s where we make our money.”

The first Fourex kiosk was launched in December at a London underground station and has since accepted around two million coins. Three other kiosks have since been launched and Paterson said the plan is to open 30 more in the next four months and another 60 by the end of the year.

The company is specifically targeting train stations and shopping malls. “Consider that King’s Cross Station will have 100 million people walking pass our machine every year,” he noted.

“And we want to franchise this around the world. We have already had requests from probably 20 regions… The possibilities are endless for this because I can easily change the [machine’s] language and the currency that is paid out – and I can do all that from my laptop because that’s how we have set it up.”