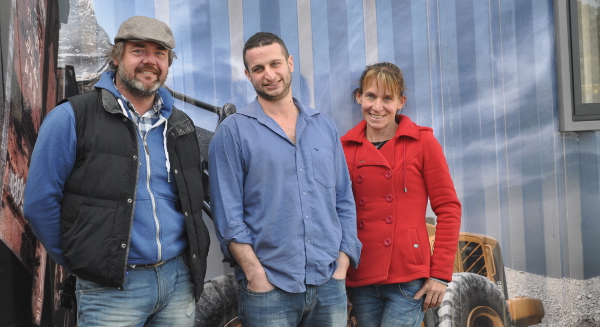 From left to right: Jason Maydew, Brad Berman and Alicia Kalil. In addition to converting shipping containers into low-cost homes, Berman-Kalil Housing Concepts also offers a variety of other solutions, such as portable offices suitable for the mining industry.

South Africa suffers from a huge housing shortage. Despite the state building more than 2.6 million homes since 1994 under its Reconstruction and Development Programme (RDP), the housing backlog is estimated at around 2.3 million families.

For those who do not qualify for a government-subsidised house and cannot afford the loan of an entry-level home, very few options are available.

The company was launched last year by entrepreneurs Brad Berman and Alicia Kalil, and while the concept of converting containers into homes is not new, the founders argue that no one is doing it like them. For example, their homes are designed so that no one could ever tell that they were ever once shipping containers.

“We just decided to take the concept up a few notches,” explained Berman. “We didn’t feel others were doing the right thing with it… So we decided we wanted to be the ones to create the industry.” 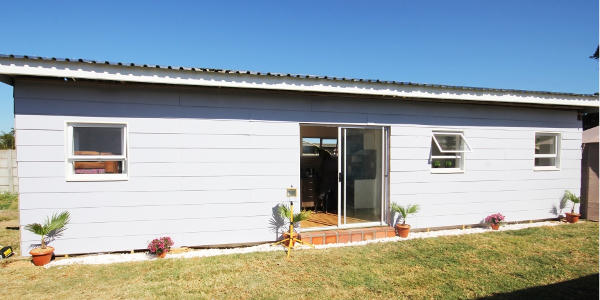 A two-bedroom home made from a shipping container.

In addition to housing, they also modify containers into a variety of other structures – such as portable offices, ablution blocks, schools and mediclinics. They are even constructing a container shopping centre in Johannesburg.

The duo has also teamed up with Jason Maydew – who has been involved in similar projects across Africa for years – to provide turnkey solutions like solar-powered geysers. Their plan is to extend their offering to other countries on the continent and the team is set to open a sales facility in Botswana.

The company is looking to develop a competitive advantage in providing homes that low-income consumers can be proud of. Key to this is affordability.

It costs the South African government around R110,000 (US$8,700) to build a bare-minimum, two-bedroom RDP house. It comes with a bathroom, open plan kitchen, tiled floor, ceiling, electricity, water and sanitation, but lacks finishing touches and are usually unplastered.

Berman and Kalil argue that developing homes from containers can provide similar houses at considerably reduced costs. “It’s about 40-60% cheaper than building with brick and mortar, depending how big you go,” said Kalil.

What is more, these container homes can be developed and delivered in just three weeks.

South African citizens eligible to apply for a RDP house must have a total household income of less than R3,500 ($277). But those that earn marginally more face limited options.

“And that is where there is a big gap in the market,” noted Maydew. “Those millions of people that are in an income bracket that should be able to afford a home, but can’t… What they can’t do is get a bond. They can’t necessarily get onto that property ladder because the price is R400,000 or R500,000.”

Kalil added this is the income group that the company is looking to target. “They have just missed the housing subsidy bracket and they can’t afford to buy a R500,000 house or even spend R150,000 to built one. But they can afford to have a R100,000 fully-fitted container home that is delivered in three weeks.”

For R100,000 ($7,910) the company offers bachelor units with a bathroom, shower, kitchenette (sink and two cooking hotplates) and built-in cupboards. They are beautifully finished with windows, flooring, a sliding door, and a variety of different exterior cladding options. 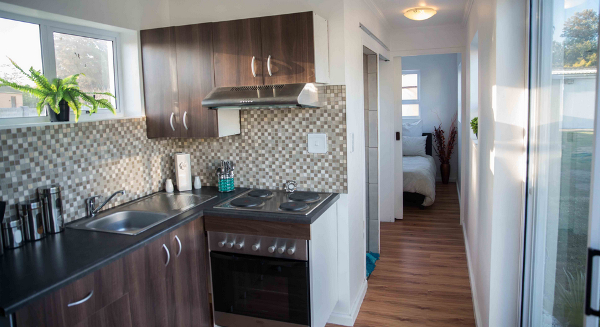 A view inside a two-bedroom container home. It comes fully-fitted with features such as an oven, extractor fan and built-in cupboards, and costs about R180,000 ($14,250).

According to the co-founders, they have been meeting with governments and municipalities to propose their housing solution, but are struggling with negative perceptions surrounding a house made from containers.

“Once they see how we are able to make them look and how beautiful their container home can be, then you get people in Noordhoek (Cape Town) that are building mansions with 8-12m containers. But the social acceptance of that needs to happen first.”

The same challenge applies to getting banks to allow consumers access to finance for these homes.

“The irony is that the demographic of people that cannot afford to go and buy a R400,000 to R500,000 house, on the same bond system can afford to buy a house for R100,000 or even R200,000… But although what we are building is as solid as a brick-built house, it doesn’t fit into the [bank’s] criteria,” Maydew explained, adding that because container homes are portable buildings by nature, it gets excluded from the system.

“[But] we are tentatively talking to some banks in regards to allowing them to assess our building procedures so that they can be valued in return for having some sort of bond on them.”

The company is also looking into other options to provide financing for their homes to low-income consumers.

“If we can get a lender or a micro-lender to inspect our properties, bring their own valuer and quantity surveyor, and simply say that they accept that this is a building, then we believe that this could change the property market in South Africa, immediately,” Maydew emphasised.