South Africa is a country that loves its beer. It’s a product that has blossomed into a multi-billion dollar industry for commercial beverage companies. But now there’s a growing popularity for craft beers made by smaller microbreweries which are opening across the country. 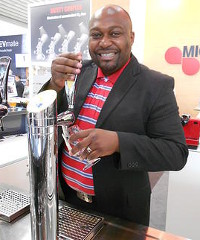 “I am very proud that I have been able to demonstrate to other African people that it is possible to venture into brewing as an African person, and I so hope that a lot of people are going to follow suit in the brewing field,” he said.

Madlala has a chemical engineering background and learnt about the business as a master brewer for the world’s second-largest brewing company.

“The determination and the career path that I followed actually helped me to gain a lot of experience which I am using now to start my own business,” he said.

Madlala said he combined his technical knowledge with his knowledge of South Africans’ palate.

“They prefer a little bit of sweetness in the beer and they love fruity beers,” he said. “It [Soweto Gold] is a craft beer. It is different because it is much richer, it is very fruity. Yes, it is less hoppy and it has a very nice lingering sweetness in the background.”

The early reviews of his main lager – and of a seasonal cherry-flavoured brew – are positive. One beer drinker said he will not “drink another beer except this. It’s the way to go.”

Madlala said he struggled for three years to find investors. Many worried about giving him money for the brewery, fearing Soweto Gold would be crushed by the big beer makers. But he was determined, and finally convinced Swedish investors to help him launch his company. He said he never gave up on his dream.

“I have gone from door to door with investors. Some do not want to listen, and people just throwing the idea out, but I never gave up. I kept the spirit up and kept moving, and look where I am today. So, whatever you do or whatever your passion is, never ever give up on your dream, no matter how difficult it is,” he said.

Madlala plans to hire 150 workers, exclusively from Soweto, by the end of January. His small brewery will produce about 3m litres of beer a year.

Madlala’s father said the beer is different to other beers, and he hopes his son’s success will help people in the community.

“First, I want him to uplift his family,” he said. “Then, if he does well, he can also uplift the community where he was born.”

The brewer of Soweto Gold says if this beer catches on in South Africa he hopes to eventually sell it in England and the US.  – VOA