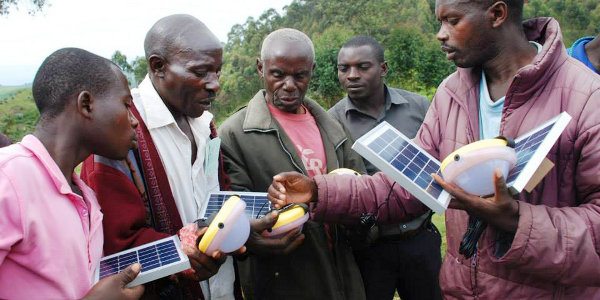 In 2005 US engineering student Patrick Walsh went to work with a charity in rural India. He encountered a population that relied on kerosene lamps as a source of lighting, but one willing to pay for a better product. He later teamed up with two former classmates to start Greenlight Planet. The company designs and manufactures the Sun King brand of portable, rechargeable solar lights and solar phone chargers.

In 2009, their first year of operation, the company sold 10,000 solar lamps in India. Since then Greenlight Planet has shifted 3.5 million units across 40 countries in Asia and Africa. Its target is 4.5 million lamps by the end of this year, and more than doubling that to 10 million by end 2016.

“Africa will account for at least half of our market… if not more,” says Radhika Thakkar, vice president of global business development.

Thakkar has spearheaded the company’s international expansion. East Africa was one of the first markets she focused on.

“We knew there was a demand and therefore a market. Our first partnership, launched in East Africa, was established in early 2010 and a year later half of our global sales were coming from Africa even though we didn’t have a single person based here.”

Millions of people in sub-Saharan Africa do not have access to electricity. There are also many who are technically connected to the grid but suffer inconsistent power supply.

“In [Ghana’s capital] Accra, an extremely successful high-growth city, there are frequent power cuts even in affluent neighbourhoods. So you don’t have to go very far to find a house challenged by power interruptions,” says Thakkar.

This presents immense growth opportunities for Greenlight Planet. Its Sun King solar lamps are currently available in 25 countries in Africa. The company sells four different lamps manufactured in China which retail for between $10 and $40.

Selling to customers based in remote areas can be challenging but Greenlight Planet has adopted innovative distribution models that have helped it navigate logistical hurdles.

In Kenya and Uganda, it has replicated a direct sales model that has been successful in its Indian operation. The model involves using ‘village entrepreneurs’, who are often community members such as teachers and farmers, to sell lamps on a commission basis.

“The sales agent is someone from the community so there is some degree of familiarity. I know you are not going to cheat me when you tell me there is a two year warranty. If I buy the lamp I know how to track you down.”

Thakkar explains distributing through small shops was not a viable distribution model because most of them focus on fast-moving consumer goods. Additionally, when buyers go to shop they already know what they want to buy and shopkeepers are focused on selling what people want, not promoting new products.

Greenlight Planet has also forged partnerships with other organisations including microfinance institutions, a telecommunications company and farmer cooperatives to make its product accessible.

“We look for channel partners that have an existing relationship with our target customer and leverage their brand, their access and their market knowledge to make our products available through them.”

Lessons from Africa applied to India

Greenlight Planet is also taking successful models in Africa to India. The company has been working with microfinance institutions in Africa that offer credit to buyers.

“So based on the success of working with these aggregate groups here, we’ve been looking for them in India and now have a really healthy channel of microfinance partnerships in India,” she says.

The company is also leveraging the network of postal offices in India following a successful roll-out in some African countries. With the advent of mobile telephony, demand for postal services has declined, yet they have a wide network of physical infrastructure in most countries. Greenlight Planet uses local post offices to stock its lanterns.

“It is still a trusted institution and there is always one in close proximity. Following some trials done with different markets in Africa we started speaking with the Indian postal service as well and began partnerships with them,” says Thakkar.