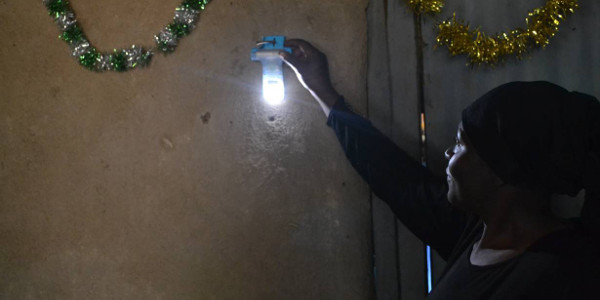 Catherine Wakhu knows the value of a lighted room to a child’s education – and also the expense.

The resident of Mayoni, a village in Western Kenya’s Kakamega County, has seven school-age children. Without money to pay for a connection to the electric grid, she used to spend 1,200 shillings (US$12) a month instead on kerosene, half of it to fuel a lantern so that her children could do their homework in the evenings.

But for the past year Wakhu has been the owner of two solar-powered lanterns, which enable her children to study and save her fuel money.

New Light Africa, the company that makes the lanterns, accepts payments on instalment over a period of six months, making the cost of 3,000 Kenyan shillings ($29) per lantern more affordable to people like Wakhu, who might otherwise struggle to acquire the technology.

The business is one of a number of enterprises across sub-Saharan Africa that are developing ideas for low-cost, high-quality and affordable clean energy products and services, from lighting to irrigation.

Some have received funding from the Renewable Energy and Adaptation to Climate Technologies (REACT) programme, part of the Africa Enterprise Challenge Fund, backed by European and other donor governments.

The clean energy REACT programme provides up to half the needed funding to private companies trying to develop business models, services and products in renewable energy and energy efficiency that will improve the lives of the rural poor.

Under the programme, up to 900,000 rural households across the region can now light their homes with solar lanterns, press their clothes with solar-powered irons or watch solar-powered televisions, said Victor Ndiege, who manages the REACT-supported portfolio of businesses.

Village barbers also can earn a living shaving people using solar-powered shavers, and farmers can irrigate their crops with solar pumps, he said.

In Miguye, a village north of the Kenyan city of Kisumu, Oliver Bill, a 24-year-old university graduate, irrigates tomatoes on his 1.3-acre piece of land using a portable solar-powered water pump acquired with a loan from Future Pump, another company that is part of the REACT scheme.

“I decided to take the risk because the repayment scheme sounded fair enough,” said Bill. He said he expects to have repaid the debt for the pump by March.

Malayo Abuti, the assistant administrative chief for Ebuhala sub-location in Kakamega County, said business-oriented funding for clean energy projects is an improvement on handouts and is helping more young people in off-grid villages start their own enterprises to earn an income.

“This is a good culture because paying back the loan gives one a sense of ownership, self esteem and it makes them more responsible than receiving free tokens from organisations,” he said.

The REACT scheme selects companies to support through competitions. So far, 78 companies across 23 sub-Saharan African countries have been awarded grants and interest-free loans to implement their proposals, Ndiege said.

The companies are required to make services and products available to rural communities without requiring full payment upfront, he said.

New Light Africa won the competition in 2016 to make and distribute solar lanterns to rural communities through a community-based organisation.

Each lantern comes with a small solar panel and is powerful enough to light one room. It is portable, meaning it can also work as a torch, and it has a port for charging at least three mobile phones.

According to Ndiege, companies are funded if their clean energy services and products are of sufficient quality and they have a plan for getting equipment to customers without the high upfront costs often associated with renewable energy.

“We always discuss with our customers to understand their financial strength before proposing to them the most appropriate payment package,” said Reagan Omondi, general manager of SolarNow, which has sold 600 home solar systems in Kenya’s Nyanza area over the past six months.

The systems can power up to six fluorescent tubes and a television set and radio, as well as charging mobile phones, he said.

Omondi notes that some customers are able to pay upfront for the system, which is priced from 27,500 shillings ($270), but others pay over a period ranging from six to 24 months, depending on their income.

“In line with the Sustainable Development Goals, our aim is to see households get hooked (up) to clean energy in a region where 510 million people have no access to electricity and are unlikely to get grid access in the foreseeable future,” said Ndiege.

Anna Jardfelt, an ambassador to Kenya from Sweden, one of the governments funding REACT, said she was happy to see women and girls, in particular, getting basic access to electricity through the programme.

“Through a regional approach we hope that the new business models developed in East Africa, providing electricity to millions of people far from the grid, will rapidly be taken up in West Africa and promote learning across the continent,” she said.