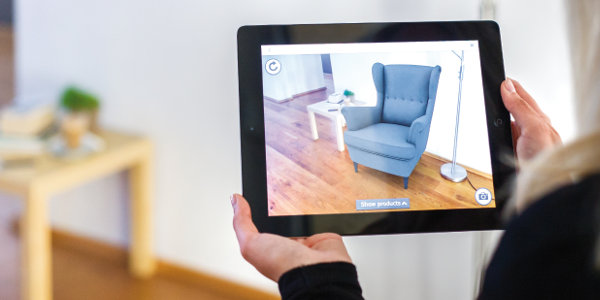 Using AR technology, IKEA allows its customers to see what furniture will look like in their homes.

Consumer behaviour is changing rapidly, driven by technology and shifting social structures. Companies need to adapt and innovate to keep up – or face becoming obsolete.

Speaking at a recent event in Cape Town, futurist Jonathan Cherry highlighted a number of trends that will impact purchasing over the coming years. Here are some of the main takeaways from his presentation.

Cherry suggested that augmented reality (AR) technologies will become major drivers of consumerism. According to him, the Pokémon Go phenomenon is just the start of a major trend.

Some companies, such as furniture retailer IKEA have already begun incorporating AR into their business:

“So IKEA, they use AR as a way of letting people see what their living room could look like. So using this layered AR you can see what the table will look like in this part of the house, without actually purchasing. So if you like it, you then obviously buy it,” he explained.

A growing number of consumers have an “authenticity radar”, and are demanding that companies are honest about their dealings.

Cherry gave the example of South African online kitchenware retailer Yuppiechef that used to send hand-written thank-you notes to customers when they purchased an item. Everyone – from the CEO to the packers – contributed to writing these. However, as the business became more successful, the integrity of the cards disappeared. As a result, Yuppiechef decided to dramatically reduce the amount they sent out in an effort to regain the cards’ authenticity.

“They said, ‘Listen there is no authenticity behind this action, and it has just become a marketing ploy.’ And that is the last thing that Yuppiechef wants to do, because it is not what the brand is about.”

Community consumption will be an important theme for the future. According to Cherry, the concept of community can take many forms, such as park runs, Cape Town’s First Thursdays (a monthly art gathering) and Critical Mass (a community cycling event in South Africa).

“You might think these are fringe ideas, but young people are going towards them like bees to honey.”
He said the deterioration of organised religion has created a gap for people to connect within like-minded groups.

The traditional walls that surrounded business, government and systems are disappearing.

“More and more people are starting to say, ‘Why should I sit in an office all day long? Because what I can do is take a laptop, and go sit at a coffee shop.’ Nowadays somebody could start an insurance company from a laptop – you don’t need a big building,” Cherry explained.

“People don’t necessarily want to buy something that lasts forever,” said Cherry, highlighting the success of affordable, fast-fashion retailer H&M as an example.

“They want to buy something which lasts for a couple weeks and then they throw it away. So call it disposable, call it a lack of attention.”

Young people are starting to place greater value on experiences than physical assets, with more spending going towards traveling and events. Cherry believes the success of Instagram is a manifestation of the experiential industry.

Consumers are also embracing the shared economy. “More and more people are saying, ‘I don’t need an Audi, I can just ‘Uber’ an Audi. I don’t want to have the responsibility of owning an asset, because adding more assets adds more complexity.’”