What started as a small second-hand car dealership 60 years ago is now one of Kenya’s leading conglomerates with interests in vehicle distribution, hospitality, real estate and venture capital. Simba Corporation has always been known in Kenya for its car business, which distributes international brands such as BMW, Mitsubishi and Mahindra. 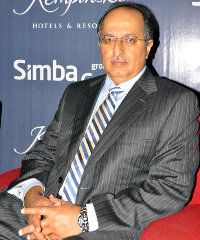 Simba CEO Adil Popat, who has largely overseen the diversification, says although the family business was doing well, a risk analysis showed reliance on one product could spell doom if things went awry. Thus the expansion began with introducing more car brands from different markets after years of reliance on two Japanese models. This decision proved a fortunate one for Simba in 2011 after the tsunami in Japan which disrupted car orders.

“We did a risk assessment and asked ourselves: ‘if we did not have this brand tomorrow what would happen to Simba?’ We realised we would be very highly affected. We knew we needed to shield ourselves. And today, if any one of the brands moved out, although it would hurt us it would not be as severe as it could have been.”

Popat’s grandfather came to Africa from India with little more than a suitcase. He settled in Uganda, married and had children before relocating to Kenya. Popat told How we made it in Africa that his family was poor and at 16 his father, Abdul Karim Popat, had to leave school and get a job because there was not enough money for tuition fees.

“He ran a bus for a little while with a friend, but later sold it and got a job. At the same time he bought second-hand cars and sold them over the weekends. Eventually he realised it could be a good business so he resigned his job and started a company.”

Popat joined the family business 20 years ago as finance director and has served as CEO for the past seven years.

A different fork in the road

Simba’s focus beyond cars has mostly been in the hospitality industry with multi-million dollar investments. In 2012 the group, through its division Simba Hospitality, developed a luxury camp at the Maasai Mara and a 200 room five-star property in Nairobi, both of which are operated by Europe’s luxury hotel group Kempinski.

Simba is set to open a hotel in Kisumu city, 355km nortwest of capital Nairobi, which it will manage and has plans to set up two more by the end of next year. Simba, which means lion in Swahili, is also planning to develop mixed-use properties.

Popat notes that Simba decided to run its hospitality business the same way it has done with its car business: by working with big brands, in this case Kempinski.

“Most hotels come across as boxes, which is great, but we wanted to do something different. We wanted to make a statement to the market. To put up a building like that costs a lot of money,” Popat says of the uniquely structured, towering pink-coloured hotel building along one of Nairobi’s major highways.

With its investments in hospitality and real estate, Popat says there is much to be learned, mistakes to be made and the need to take a long-term approach.

“Our motorcar business is mature, we run it reasonably well and returns come faster. And we know that in the hospitality business our return on investment will take much longer. We believe that assets need to be nurtured. We need to know the business better and become fundis (craftsmen in Swahili) in that business too, which is a process we are going through now. The benefit of course is that we have a fantastic team of professional, dedicated and well-trained people,” he says.

Although recent terrorist attacks have impacted the hospitality industry, Popat believes when security issues are resolved, things will stabilise and the country will receive more tourists and at the same time more hotel guests. Right now international hotel brands are eyeing or expanding in Kenya, but Popat says although opportunities might be drying up in the five-star market, the mid and low-ends are just starting to thrive.

“To put up a new five-star hotel in this market is going to be very difficult and challenging because the rates will come down and your feasibilities will work against you. But where there will be great opportunity is in the low-level units, the two-star and three-star markets. And that is where we are investing in the next phase. In that zone I believe we can do extremely well.”

Popat explains that when opening new business lines – which also include divisions handling car rentals, sales of power generators, and a venture capital arm – his approach is to first understand the business backwards.

“Yes we will hire people to run it, but I too must thoroughly know the business. It is very important that as CEO you know your numbers well, and get good people to run it as you oversee all aspects.”