Sierra Leone’s Bumbuna hydropower plant was inaugurated at the end of last year. For Samuel Onwona, resident representative of the African Development Bank in Freetown, the plant will bring down the cost of business in the country with a much cheaper, sustainable and reliable source of energy.

What are the immediate or short-term benefits of Bumbuna for the economy and the people of Sierra Leone?

The immediate benefits the project brings to the economy are manifold. First, it brings self gratification and national pride to the people of Sierra Leone, given the fact that for many Sierra Leoneans, this project was a myth, and even those who were a bit optimistic about its completion, they never believed it would happen in their lifetime.

Second, the thermal plant under the emergency energy programme was costing 44 cents per KWh compared to the Bumbuna cost of 10-12 cents per KWh. We, therefore, expect that the cost of doing business, especially in the manufacturing sector, will go down significantly. This means that Sierra Leoneans who could not afford to buy generators for their small and medium scale enterprises will now be able to grow their business and generate both income and employment.

Third, Freetown will enjoy more reliable clean and affordable electricity along with the towns of Makeni, Lunsar and Bumbuna township as transmission and distribution networks are properly rehabilitated.

Fourth, the government can now redirect much needed resources used to finance the emergency thermal plants to other sectors such as agriculture, health and education. For instance, the fuel needed to power the thermal plant alone cost the government a whopping US$2 million per month, excluding the management fees for the experts running the plant. Clearly this was quite a burden for a post-conflict fragile state like Sierra Leone.

Bumbuna will ultimately have the capacity to supply energy to the entire country. What investments will that necessitate in terms of distribution, commercialisation and pricing?

The Bumbuna Phase I Project only brings 50 megawatts (MW) of power, which is not enough to meet the demand on the ground. Bumbuna Phase II, estimated to bring on an additional 225 MW of power, is needed along with rural electrification programmes of mini hydro-electric plants. In addition to Bumbuna, bio-energy and solar energy sources will all be required to meet future demand.

The immediate challenge for the government is to work on rehabilitating the old and introducing new distribution and transmission networks for Freetown, Makeni, Lunsar and Bumbuna Township. Currently, the distribution network is only able to absorb 12-15 MW of the 50 MW being generated under Bumbuna Phase I. The energy policy, which seeks to unbundle generation from the transmission and distribution phases, has to be enacted by parliament and implemented to ensure that a national grid exists. An independent utilities regulatory body needs to be set up to manage the tariff structure to guide potential independent power producers (IPPs) who may want come in to invest and sell power to the grid. Unless the foregoing steps are taken to place the energy sector on a sound footing, efficient and reliable supply of affordable energy could remain a challenge for the country. 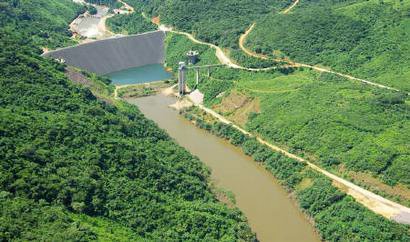 Bumbuna was initiated three decades ago. Why did it take so long? What were the key obstacles?

The reasons for the delay in completing this project are two-fold. First, it was the start-up delay with the studies. The first study was conducted in 1972 and was followed by second study in 1975. There was even a third study sometime in 1982, before calls for bids were finalised. The African Development Bank got involved in 1989 and approved our first loan in 1990. But just a year later, the ten-year war began. This was the second reason for the delay. We remained engaged until 1997 when the escalation of the war caused us to leave. The contractor had to be demobilised even though the works were not completed. Equipment already installed and completed civil works deteriorated during the war period, leading to huge cost overruns.

After the return of peace in 2002, it took government considerable time to secure the funding required to complete the project. We are proud to stress the fact that as a key partner with the government of Sierra Leone, the African Development Bank has been the only donor that remained continuously engaged with the Bumbuna Project from 1989 until its commissioning on 6 November 2009. We are, therefore, happy to have been part of this historic event which has made the Bumbuna dream a reality for the people of Sierra Leone.

What is the overall situation in the power sector today?

The situation in the power sector is far better today than what it was a year ago. We have assisted the ministry to put in place an energy sector policy which may go to parliament for approval soon. As I have alluded to already, this policy provides for the unbundling of the generation, transmission and distribution of electricity over a period of time, so as to encourage private sector participation and engender a more efficient delivery of reliable, sustainable and affordable energy to power the economy.

Presently, there is no national grid, so that has to be an important priority along with the old distribution network in the Freetown metropolitan area. We need to assist the Government to create a competitive as well as conducive environment to attract IPPs into the sector because the public sector alone cannot do it.

The National Power Authority (NPA) needs to quickly move away from post-paid to pre-paid meters to significantly improve its revenue generation potential. In addition, there is the need to strengthen Bo and Kenema Transmission and Distribution networks and develop the medium voltage transmission line for Bo-Njala-Moyamba-Mobimbi and Lungi-Port Loko-Kambia

Are people willing to pay the price to get clean and safe energy?

The willingness to pay (WTP) is presently being expressed on a proxy basis by the way people cooperate to pay their electricity bills and recharge their power cards for those with prepaid meters. More importantly, the opportunity cost of not having reliable and regular supply of electricity for home consumption, schools, hospitals and private business has been quite high. If the transmission and distribution networks are sorted out and prepaid meters are installed to weed out illegal connections, this will ensure a more reliable supply of energy at a price much lower than the pre-Bumbuna price linked to the 44 cents per KWh cost of the thermal plant.

In other words, we expect the post-Bumbuna energy price to be lower since the cost of generation is now well below that of the thermal emergency plant. The WTP will no doubt depend on the retail price that is finally set and the reliability of electricity supply.

This article was first published by the African Development Bank Group