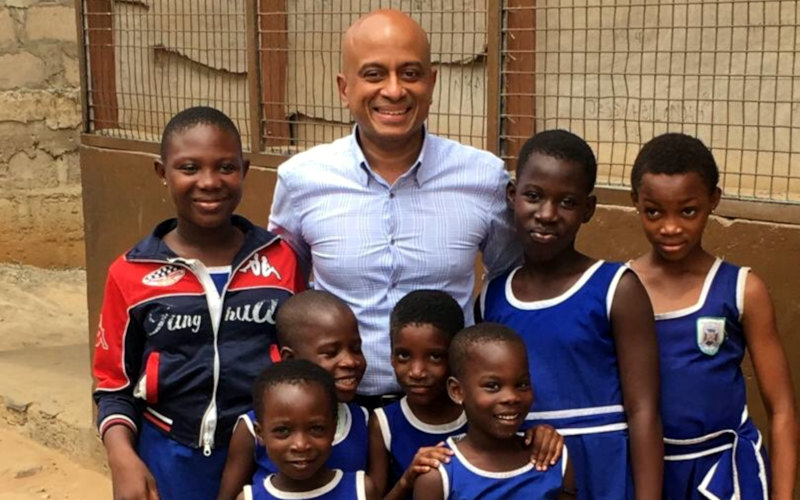 Shaun Jayaratnam (middle) at a school in Accra, Ghana

“Protectionism is a misnomer. The only people protected by tariffs, quotas and trade restrictions are those engaged in uneconomic and wasteful activity. Free trade is the only philosophy compatible with international peace and prosperity.” – Walter Block

The gravity and scope of the US and China trade war tops the news agenda these days. It’s serious enough for my son’s primary 5 class to have a discussion on its impact on Singapore.

China’s unfair competition strategy, taking advantage of the US open markets while keeping its own markets closed to US companies and products as well as factory closures and job losses in the US are the many reasons cited for the trade war. A Forbes 24 January 2019 article states that China’s technological rise and quest to dominate digital technologies as perhaps an unofficial reason for the trade war.

Whatever the reasons, justifiable or not, the on-going trade war will inevitably have significant repercussions on international trade and most likely lead to a global economic recession. As a company with a sizeable business interest in Africa, I’m concerned, afraid even, on how the future of Africa will be shaped by this trade war.

China’s trade with Africa has increased 10 times since the year 2000 and it has become the continent’s leading trading partner. When tariffs are imposed on Chinese-made products, the growth in African countries that supply raw materials will be stifled.

According to statistics from the General Administration of Customs of China, in 2018, China’s total import and export volume with Africa was $204.19 billion, a year-on-year increase of 19.7%, exceeding the overall growth rate of foreign trade in the same period by 7.1%. China’s loans to several African countries is in excess of $1 billion. Should the trade war escalate China’s capital account surplus and forex reserves will fall, resulting in less aid to Africa, further affecting the African economies.

Due to Trump’s protectionist policies, major markets across Africa are taking a tumble. Stock markets in Nigeria, Kenya and South Africa have been impacted.

In an interconnected global economy, trade wars are likely to have a domino effect beyond the countries and sectors targeted, which is exactly what’s happening now in Africa.

Most African countries, except maybe South Africa, are not competitive nor have the economic capacity to replace US and Chinese firms, hence can’t benefit from the trade war.

An economic downturn often accompanies disturbances in commodity prices, financial markets and currencies, all which will have important repercussions for African economies. Central banks across several African nations are already facing shortages of foreign exchange, which slows down imports.

South African wine exporters as well as fruit and nut producers, could see their business improve because of the 15% retaliatory tariff China imposed on similar US products. However, yield is low, hence opportunities for local agricultural exporters across Africa would be small. Bottom line is the downside would be greater than the upside, largely because of the impact on manufacturing.

Most African countries depend on foreign loans to sustain their economies. Many also depend on their commodity exports. Angola, Zambia, Congo, Sudan and Nigeria that sell hard commodities like oil, cobalt, copper or iron ore, will be hurt. The US-China trade war is partly to blame for Anglo-Swiss mining giant Glencore’s move to shut a cobalt mine in the Democratic Republic of Congo and copper mining shafts in Zambia, with the probable loss of about 4,400 jobs. The price of cobalt, an essential material in the rechargeable batteries that power smartphones and electric cars, has plunged from more than $90,000 per tonne early last year to about $28,000 per tonne, according to the London Metal Exchange.

Furthermore, a decline in Chinese demand for commodities will put pressure on African government revenues. The African Development Bank (AfDB) predicts that the trade war could lead to a 2.5% drop in the gross domestic product of resource-rich African countries in three years. A 17 August 2019 report in the South China Post stated that AfDB’s African Economic Outlook 2019 report noted that Africa’s chances of being hurt by the trade war were high, given that over 60% of Africa’s exports go to the US, China and Europe, and more than 70% of Africa’s imports originate from these countries. As trade tensions can spiral into currency wars and tighter monetary policies, Africa nations will find it tough to service international debt.

China will be aggressive in looking for replacement markets outside of the US. This may result in China dumping its products very cheaply into Africa to mitigate what it has lost in the US.

There is a mixture of opportunity and harm coming Africa’s way, more harm than opportunity. Harm comes from the potential of China dumping cheap products into the continent and a reduction in commodity exports due to reduced demand from China. But there are also some opportunities to fill the exports gap to the US, and even to fill some commodities export gaps left by the US in China itself.

The trade war will surely have a rippling effect for African nations because these countries are at the bottom end of the supply chain.

The most positive consequence of the trade war is that it presents African policymakers and stakeholders an opportunity to redouble their efforts on economic reforms and to create an investment environment to become part of the global supply chain. Countries such as Côte d’Ivoire, Ghana, Nigeria and Ethiopia should seize this opportunity. There is no time but the present.

Trade wars have global economic implications and this trade war may rumble on for some time. There is no denying that African economies are collateral damage in this war and it can potentially reverse the gains made in economic growth and poverty reduction.