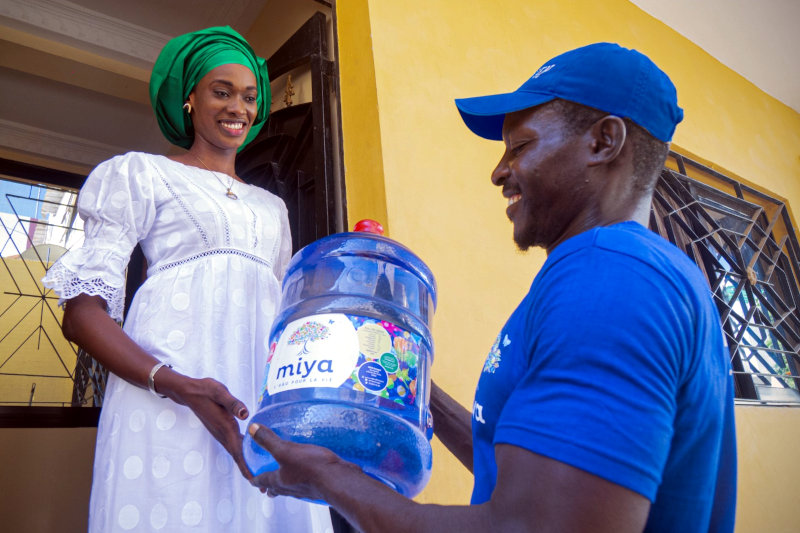 MIYA’s business model centres on the delivery of water to homes and offices in reusable bottles.

Bottled water in Senegal is often expensive and the single-use containers may end up on the streets or in landfills, polluting the environment. MIYA, a Senegal-based water company, is providing a cheaper, more sustainable option to the mainstream brands commonly used in the West African country.

MIYA tries to provide water at an affordable price; its customers pay 1,200 CFA (US$2.08) for 19 litres compared to the average price of 1,000 CFA ($1.73) for 10 litres. Water comes in 11- and 19-litre bottles, which can be reused on a deposit-based scheme and customers return the bottles for refills.

Adam Thiam Cox, CEO, says that the company is able to make its prices cheaper than competitors because “reusable containers actually decrease the unit cost of packaging individual sales and in the long run, that is the biggest differentiator”. The second aspect, as a water delivery company, is that its decentralised production facilities in more than one location brings the cost of transport down significantly.

Since selling its first bottle in 2019, the firm has gradually expanded from Senegal’s capital of Dakar to Thiès, the country’s third largest city. At present, Thiam Cox estimates the company, which has around 70 employees, supplies over 1,500 households and 300 large companies as well as more than 1,000 small boutique shops with water. “We want to be the trusted and cheapest source of water, and it must be affordable and good quality water,” he says.

While over 80% of the 16.7 million Senegalese have basic access to water services, far less have access to safe water. MIYA ’s product is consumed largely in urban areas where, despite provisions by city councils, outbreaks of disease and diarrhoea persist because the water is unsafe in low-income neighbourhoods.

More than 2.5 million people in Dakar have inadequate sanitation as the city council is unable to keep up with rapid growth, and the increasing population means services such as water purification are stretched. Although there is public concern about the safety of Dakar’s water, Thiam Cox explains consumers prefer to take risks with tap water rather than paying for bottled water. This means it is hard to engineer demand for MIYA’s water alternative.

“In an ideal world, people wouldn’t drink dirty water in Senegal but that’s not how it works. People think of the cost and issues of safety come later. That’s why we’re on a mission to cut the cost of bottled water. If it were much cheaper and more accessible, people would drink it.” 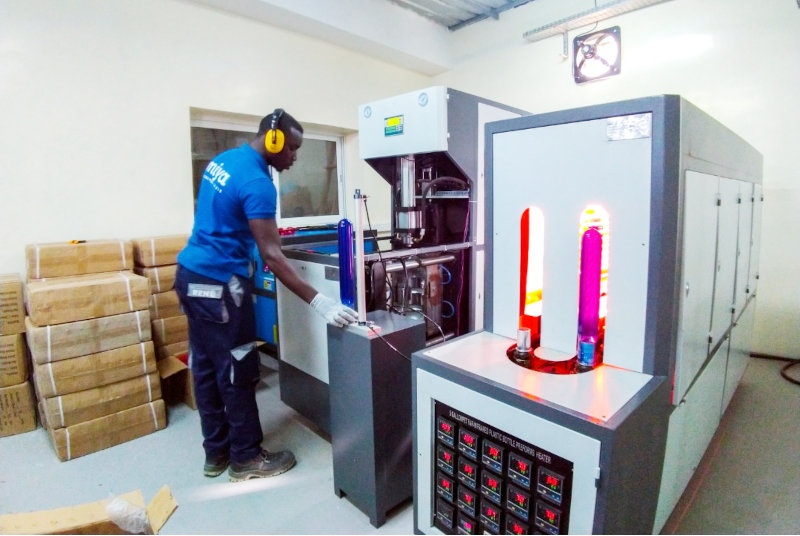 One of MIYA’s water plants.

Despite the setbacks of the pandemic – which affected output and delivery services as staff could not come to work and products could not be dispatched between cities owing to travel restrictions and curfews – MIYA has tripled its customer base. But it faces tough competition from large companies that sell water in single-use plastic bottles. Leading brands like Kirène, for example, can create widespread brand awareness by sponsoring popular sporting events and music stars.

“We are trying to build a multi-country trusted water brand against some established brands. These brands have more reach because they have massive marketing budgets and advertise on huge billboards or sponsor huge games like the recent AfCON (Africa Cup of Nations),” Thiam Cox says.

On a mission to halve the cost of bottled water while minimising the amount of plastic waste plaguing Senegal’s cities and countryside, MIYA has thus far avoided passing rising costs onto consumers. It has done this through strong support from shareholders that are willing to subsidise the price of water, but Thiam Cox says MIYA requires more investment to maintain this policy and grow the business.

One thing that may boost MIYA’s business model is legislation that limits the role of single-use plastics in the economy. In 2020, the government banned the use of water sachets and single-use plastic cups, but the prohibition sparked protests from street vendors who depend on selling frozen and liquid sachets for a living. Sachets are cheap and popular and with the rise of Covid-19, the government was forced to back down and give a grace period until the end of the pandemic. The government went ahead with the ban in December 2021, however, Thiam Cox says it is yet to be properly enforced.

“Plastic bags and plastic coffee cups have largely disappeared. But water sachets are still all over the place,” he says, adding that some water sachet companies are lobbying the government to continue operations by staging beach cleanups. Previously, Senegal tried to outlaw the use of polythene bags and importation of plastic, but the 2015 decree was not fully implemented. Other African countries like Kenya banned single-use plastics in 2017, in an example of a ban that has taken full effect. If the ban is properly implemented, MIYA should be well poised to take advantage of the eco-friendly ruling by rolling out its multi-use bottles.

Looking to take its concept further, MIYA is planning to extend its reach locally and beyond borders. “We are hoping to expand operations within Senegal and to expand into Francophone West Africa,” Thiam Cox said, referring to opportunities in Burkina Faso, Mali and Côte d’Ivoire. He also hopes to increase the efficiency of some of MIYA’s operations to enable the more effective delivery of water dispensers, pumps and cups. “At the moment, we’re like the old milk deliveryman, but for water,” he laughs.