Global brewers’ key problem these days is that they are facing up to stagnant or declining beer volume sales. According to global research firm Euromonitor, beer volume sales grew by a measly 1% in 2013. The beer industry is looking for ways to reverse that performance, and one way SABMiller is taking is by diversifying its fast-moving goods basket. 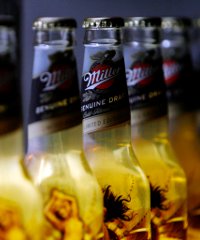 SABMiller is strengthening its hold of its key regional operation with a US$3bn merger of its bottling assets with Coca-Cola in South and East Africa.

SABMiller has shown its interest in strengthening its hold of its key regional operation with a US$3bn merger of its bottling assets with Coca-Cola in South and East Africa. This merger will create the region’s largest bottling operation for soft drinks that will serve 12 African markets. SABMiller will hold 57% of the new business whilst Coca-Cola will own 11%, and the remainder will be owned by Gutsche Family Investments, a major shareholder in Coca-Cola’s African bottling operations.

This move makes sense for both companies as there is a mutually beneficial situation in the Middle East and Africa. Euromonitor forecasts volume sales CAGR of 7% for soft drinks and 5% for beer in the region illustrates a growth opportunity for both companies. The soft drinks company is benefiting from the brewer’s strong footprint in the continent and with the brewer diversifying its revenue source toward a more dynamic market. Keep in mind SABMiller’s global volume sales in soft drinks showed a more dynamic performance in 2014 at 9% when compared to its 1% decline in lager. Also, in 2013 the company’s soft drinks volume sales also made up 21% of it’s global volume sales for that year, with 49% deriving from Africa – including South Africa.

SABMiller is looking to diversify its revenue portfolio in its key regional operations and beyond the highly regulated beer market. Additionally, its revenue growth will support it in competing against Anheuser-Busch InBev’s higher double-digit margins and in keeping away any merger or acquisition threat from the number one global brewer. This seems to be a shrewd move from the company not only to build on its margin-growth strategy, but to make it more costly for a take-over and more logistically complex for a merger as A-B InBev has a licensing relationship with PepsiCo in Latin America.