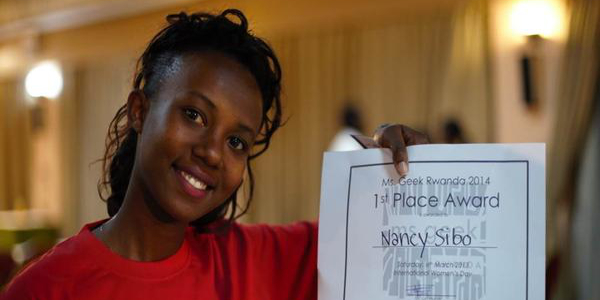 Nancy Sibo (21) founded Miheha Straw Bags Products in 2013, a social enterprise that manufactures a variety of handcrafted products – such as handbags, earrings and belts – made of recycled plastic drinking straws.

For many African women, the opportunities for becoming an entrepreneur and growing formal businesses are even scarcer than for their male counterparts.

Women typically struggle more with accessing loans from banks and other financial institutions in many African countries, and are often not given the same opportunities in education due to beliefs around traditional roles of men and women. For many low-income families, when given the choice to send either the son or daughter to school, the son is typically given preference.

This year, only 27% of applicants for the Anzisha Prize were women. However, one country stands out – Rwanda. While its small population meant overall number of applications from the country was only a fraction of Nigeria’s, what was interesting is that close to 60% of applicants were women.

This seems to represent the country’s overall focus around women empowerment. After Rwanda’s genocide in 1994, women made up 70% of the population, and President Paul Kagame has since introduced a number of initiatives to support women in business, education and politics. In fact, Rwanda has caught the attention of international media over the years for being the only country in the world to have more women members of parliament than men.

“It is exciting to see Rwanda take such progressive steps. Women empowerment has considerable benefits for any economy’s growth and development, and we hope that other African countries follow Rwanda’s example,” says Grace Kalisha, senior programmes manager at the African Leadership Academy.

In celebration of Rwanda’s impressive proportion of women applicants, The Anzisha Prize has highlighted some of these entrepreneurs below.

IMPORTANT NOTE: Finalists for the Anzisha Prize, Africa’s premier award for its youngest entrepreneurs, have not yet been announced. The entrepreneurs profiled below have been selected randomly, and are not necessarily winners.

Gisele Iradukunda (20) is the founder of Radio Gare Project, a company that installs radio speakers in bus stations for the purpose of communicating with commuters. She came up with the idea last year whilst trying to find a way to better support her family and herself.

Iradukunda realised bus companies would pay to use the system to communicate important information to passengers about their service. Other companies can also use it to advertise their products and services to a large number of people while they wait for a bus.

After getting a bank loan, she installed her first sound system in a bus station in Nyamata, a town in southeastern Rwanda. Speakers were placed in four corners of the station so that the sound is audible in a 500 metre radius.

Today her systems are operating in three bus stations in eastern Rwanda and she is working on installing three more in the southern part of the country where she is currently studying at university. Her goal is to expand to all Rwandan bus stations over the next few years.

In addition to advertisements from bus companies and retailers, Iradukunda also uses the service to broadcast interviews with doctors who can share vital information about HIV prevention and general healthcare.

“The District also uses our radio to pass on information about events, meetings and all other affairs that they would like the public to attend,” adds Iradukunda.

Henriette Dukunde (21) is a biology student who is playing her part in alleviating poverty amongst a group of women in Huye, in southern Rwanda. In 2013, Dukunde and a friend started the Rice Project, a farming co-operative consisting of more than 50 women.

They are organised into four groups and provided with parcels of land – as well as seeds, fertilisers and other farming materials – to cultivate rice in the Nyanza marshland.

Once the rice is sold, the cooperatives get 65% of the revenue with the rest going towards the sustainability of the project.

“The Rice Project has improved the lives of poor vulnerable women,” says Dukunde. “It has both created jobs for them and enabled them to afford their basic daily needs.”

Alice Igiraneza (21) is a medical student studying at the University of Rwanda who is involved in a number of organisations focused on community development, including the Girls Leaders Forum and the Rwanda Village Concept Project.

She is also the founder of Kiza, a restaurant which provides a selection of healthy food options for students and employees at university. The aim is to educate others on healthy eating and combat diseases such as diabetes.

The restaurant serves about 300 people and provides employment to 20 medical students from the poorest families who are struggling to pay for necessities.

“We pay them a salary of $60 a month and provide them with food so that they can continue their studies and become good doctors for the future well-being of the population,” explained Igiraneza.

She also runs a consultation centre at the university that advises students and faculty on good nutrition and a healthy lifestyle.

Empowering women through fashion products made of recycled straws

Nancy Sibo (21) has combined her creative mind with her love for the environment and belief in women’s empowerment. In 2013 she founded Miheha Straw Bags Products, a social enterprise that manufactures a variety of original handcrafted products – such as handbags, earrings and belts – made of recycled plastic drinking straws.

“In developing countries like Rwanda, garbage collection and recycling services are often not available or are inadequate,” says Sibo.

“We have decided to turn waste into opportunity for the enterprise, the environment and for the women.”

The initiative provides training for groups of women hoping to earn a basic living through making these fashion products.

“Suzanne is a young mother who joined Miheha in 2013 when she was extremely poor with no access to some basics of life. But, through the trainings she received from our initiative, she has changed her life and is now training other women at our enterprise,” she highlights.

She started the initiative, called Kinazi Dairy Cooperative (KIDACO), in 2012 when she noticed that many farmers where struggling to sell their milk. The cooperative has a particular focus on assisting women genocide survivors.

Today the organisation serves over 3,200 farmers and employs 10 milk collectors to supply both Rwanda and Burundi.

“My vision is to help eradicate poverty and hunger among vulnerable people in my community,” explains Butare.