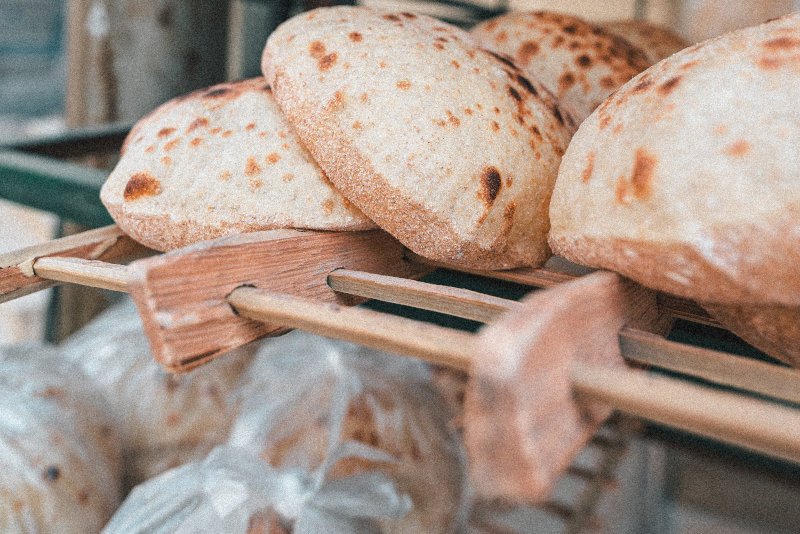 Russia’s invasion of Ukraine has disrupted agricultural production and trade from one of the world’s major food exporting regions. The war threatens to drive rising food prices still higher and create scarcity, especially for regions most dependent on wheat and other exports from Russia and Ukraine.

Particularly affected is the Middle East and North Africa region. These Arab countries consume the highest wheat per capita, about 128 kg of wheat per capita, which is twice the world average. More than half of this comes from Russia and Ukraine.

Sudan, which is part of the Middle East and North Africa region, faces a uniquely difficult set of circumstances as these disruptions loom. As with other countries in the region, wheat is a key food item. It’s second only to sorghum as a source of calories, accounting for a fifth of the total calories consumed daily. Demand for wheat has grown rapidly in the last 15 to 20 years driven mainly by population growth and changing consumer preferences for bread and other wheat products.

However, only about 15% of the wheat consumed is grown in Sudan, and this share could shrink due to rising fertiliser and energy prices. The majority of imported wheat in Sudan is sourced from Russia and Ukraine, which together accounted for 59% of imports in 2020.

Moreover, because it is the staple food of the urban population, especially the urban poor, wheat is politically important. In recent years large-scale protests have followed changes in the subsidised price of baladi bread (traditional flatbread).

The situation in Sudan is already tense, for months there have been widespread protests against the current military government. The wheat crisis could escalate things further.

Prices for wheat and fuel were already spiking before the war started. They began rising in 2019 as a result of a series of domestic problems in Sudan, including high inflation and political instability, with severe adverse consequences for the Sudanese economy. 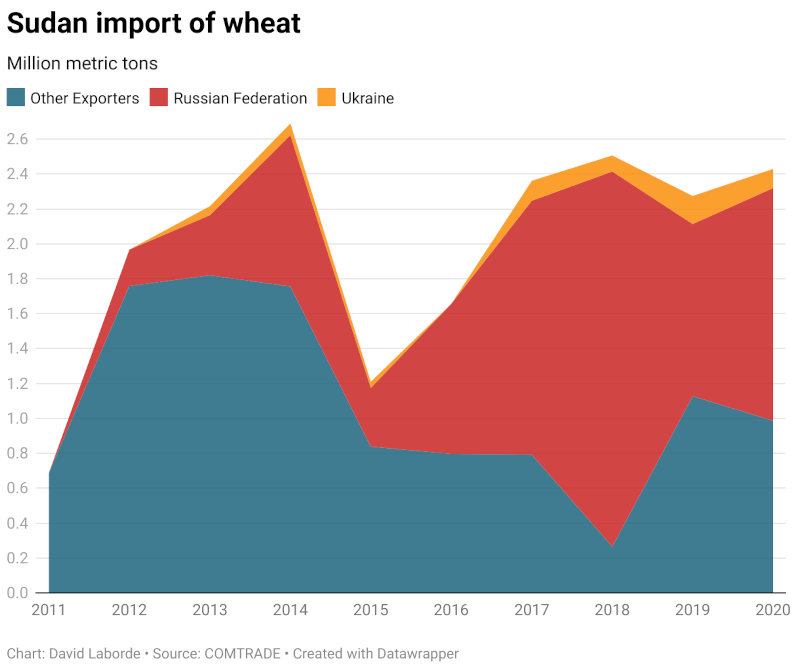 Wheat prices continued to surge in 2021 due largely to overall domestic inflation, foreign exchange shortages that limited wheat imports, a rapid depreciation of the exchange rate and continued low productivity of domestic production. In addition, the removal of fuel subsidies in June 2021 contributed to increased production costs for farmers and bakeries for non-subsidised inputs such as water, yeast, cooking gas, labour, and oil.

Many bakeries went out of business as production costs increased more than the official sales price of subsidised flat bread.

Inflationary pressures were compounded further by a cut in funding from international donors following the military coup in October 2021.

These problems intensified in 2022.

On 1 January, the Sudan government abandoned all forms of subsidies on wheat (grain, flour and bread), forcing milling companies to obtain grain in the higher-priced open market. Overall, between July 2021 and February 2022, the wholesale price of wheat in Khartoum rose by 112% (about 60% in real terms).

Then came Russia’s invasion of Ukraine.

The resulting disruption of wheat exports has pushed imported wheat prices still higher. Bread prices are expected to rise further as well, both because of higher wheat prices and increased production costs due to higher oil and gas prices.

For example, the price of gas used as cooking fuel for most bakeries has recently jumped 56%; the price of a jerry can of oil has jumped 67%. 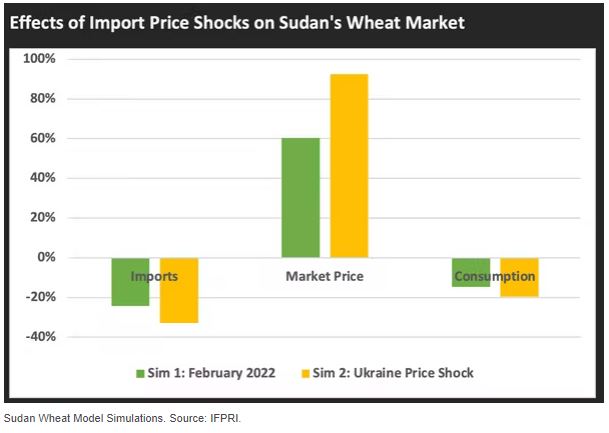 To assess the impact of the surge in domestic prices in 2021 and what could happen to the market prices of imports and domestic wheat consumption due to the conflict in Ukraine in early 2022, we ran simulations using a partial equilibrium model of Sudan’s wheat economy.

The model used for our simulations is a simplified version of a partial equilibrium multi-market model commonly used for agricultural trade policy analysis that takes into account agricultural production, household consumption, prices and trade.

Model simulations indicate that the 61% surge in the wholesale price of wheat in Sudan between August 2021 and February 2022 reduced the country’s wheat imports by 24% and total wheat consumption (including consumption of wheat products) by 15%. Simulations of a possible further 20% increase in real wheat prices, due to the Ukraine invasion, suggest this could lead to an additional decline in wheat imports and consumer demand for wheat products of 9 and 5 percentage points, respectively.

These wheat price shocks have serious consequences for Sudan’s food economy and especially for urban poor households. In the model simulations, wheat consumption dropped by 16%-19% between July 2021 and February 2022 because of domestic policy changes. And then by another 5% in March 2022.

The welfare of rural poor households, who constitute the majority of the Sudan’s population, is least affected by these wheat market shocks given their relatively low per capita consumption of wheat products in 2022 (about 12 kgs/person).

What can be done

Sudan needs to address the immediate impacts of the current crisis. It should then look to building its resilience to reduce the impacts of the next one. Here are several policy measures to consider:

Putting some – or all – of these in place can help build a more resilient wheat system in Sudan. This would give households the wherewithal to better withstand future economic shocks.

This article was originally published on The Conversation.