In 2013 US-born Erfaan Mojgani moved to Tanzania to start Kaymu, an online marketplace that allows buyers and sellers to trade a wide range of products including home appliances, electronics and fashion. Kaymu is one of several e-commerce platforms owned by the Africa Internet Group (AIG). Mojgani told Dinfin Mulupi about running an online company in Tanzania. Below are edited excerpts from the interview. 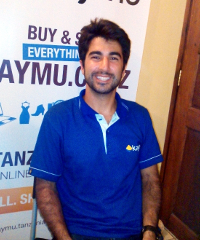 What has been the market’s reaction since you launched Kaymu in Tanzania in October 2013?

Reaction has been good, especially in the last six months. In the first months we were targeting a more upper-class seller. So we went mainly to city centre shops and to people already selling online. Thus we were just offering them another platform [but] in the past six months we have had a dramatic shift in strategy.

We bring on about 200 vendors a month, and that’s quite a significant figure given that many of these people have never sold online before. We still find shops that know how to sell on Instagram, but this is truly their first marketplace experience and we are the ones who introduce them to the idea of a marketplace, and what selling online can do for your business. We have grown over four or five times, just in the past six months.

Why was the Tanzanian market interesting for AIG?

Technology isn’t being born and bred here often, but people are adopting technology quickly. I was here a few summers ago in 2013 and some people had WhatsApp, but now it’s how everyone communicates in a span of just 18 months. The potential of this country is huge. People do adopt technology quite quickly.

Swahili is a popular business language in Tanzania. How much of a challenge is the language?

It’s a bit of a challenge I’ll be honest, but it’s fun. It pushes me to learn a language I think is really pretty, and I have to find more time for it. But it’s tough because I rely on some of our biggest sellers who don’t speak English. So at the moment, when I go to meet them I rely on my teammates to translate. And when we start getting into serious negotiations, I have to hope they are expressing the message the same way I would.

Another challenge is sometimes people will agree to do something because they don’t want to say ‘no’ in front of me. But then a week later they don’t do what I assumed they’d agreed to, either because they didn’t understand or just didn’t want to. The culture here doesn’t like sharing bad news.

What difficulties do you face running the business?

The toughest part is the post-purchase process, especially the logistics. This is not that unique to many African countries unfortunately, but the idea of street names and proper addresses is quite rare. Even for us, many of our vendors are in these crowded markets yet don’t even have a shop sign.

Working with business partners can also be tricky because we have to make sure we find the best ones, whether it’s a delivery company, a bank doing payments, or the sellers. So getting the most reliable and responsible partners is a little bit of a challenge.

Definitely the business environment is interesting in a couple ways. One is there’s a lot of opportunity here and that’s what’s fun about it. And because this is a mostly informal economy, we have to educate both sellers and buyers.

Do you expect to see more competition?

There is competition at the upper-end of the market. However, I think we can be dominant tackling the middle class. There will be a much bigger middle class in the next two to three years. Right now it’s still the upper-class who are online. But if you think about all the new people coming online and getting emails and browsing the internet and selling online – that growth is all in the lower to middle class.

Your advice for foreign investors looking to enter the Tanzanian market?

You really need a good understanding of the market so it is important to pilot first. Don’t just assume something that works in Nigeria works here in exactly the same way. Understand that your population is different, has different cultures, different tastes and also Swahili is the language of business here.

You need good local people to help you communicate unless you are fluent in Swahili yourself. Have partners who have good connections and know how the government works. I grew up with online shopping and selling in the US so this is not new to me, but not for someone who has maybe only had it around six months or a year. Also, we test the service on our own team every week and get feedback from them.