Sudanese-born telecoms billionaire and entrepreneur, Mo Ibrahim, says the rule of law in Africa is not as bad as it is generally perceived to be by western companies. In fact, he said it is often better than in most countries within the BRIC (Brazil, Russia, India and China) economic grouping. 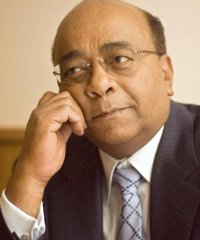 “In my own business I sued three [African] governments in the local courts, and I won every case. I challenge any businessman here to sue China in a Chinese court,” he told an audience of business people at the US-Africa Leaders Summit, hosted in Washington DC last week.

However, he asked that American companies promote and practise “clean business” in Africa. There have been accusations made in recent years that some foreign companies from wealthy nations are manipulating the system to avoid taxation in their African operations through complex management models and lack of transparency.

For example, a report published by the Africa Progress Panel (APP) last year revealed that billions were leaving Africa through illicit deals such as tax avoidance and evasion, unfair pricing practices and secrecy around company ownership and revenue flows. APP estimates that around US$38bn leaves the continent each year through trade mispricing alone.

“You are absolutely welcome [in Africa]. Make as much money as you can, but can you please pay your taxes, because this is a major problem,” urged Ibrahim.

“If you want to succeed in the long term you have to do clean business. Otherwise it comes and bites you in the backside… so please behave.”

‘Do your homework’ before investing

Ibrahim is the founder of Celtel, one of Africa’s first mobile network operators. In 2005 he sold the company for $3.4bn and, according to Forbes, pocketed $1.4bn.

During the panel discussion Ibrahim was asked to share some of his secrets to business success in Africa. His first tip for investors: spend time getting to know and understand the African markets they want to enter. “Like with any investment, anywhere… You really need to do your homework before you go in.”

He also believes Celtel was successful because it was designed to be a pan-African company from the start, and he suggested that foreign companies include a regional expansion plan for their business on the continent.

To attract further foreign investment, Ibrahim also proposed the idea of establishing a pan-African stock exchange on the continent.

“Before any investor goes into any country, he is looking for the exit door. We have only six or seven liquid exchanges in Africa [and] that doesn’t work. We need to have regional exchanges, or a pan-African [exchange]. It’s not difficult – it’s easy and simple, and the existing exchanges could also be shareholders in that exchange… It would afford cheap funding for companies, and an exit for investors.”