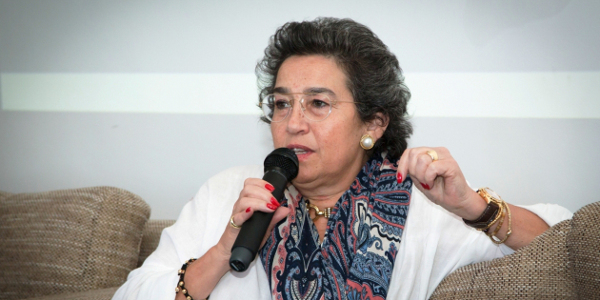 This week on Profit Point, a segment that airs on ‘CNN Marketplace Africa’, South Africa’s richest woman Wendy Appelbaum discusses how she started her own wine business due to her experiences of being in boardrooms.

Despite being the daughter of Donald Gordon, founder of the Liberty Group, Appelbaum says that her privileged start in life isn’t the only reason for her success: “I really did understand how to run a business and how to make money. A lot of people say I was born with a silver spoon in my mouth, which to a degree I was, but I’ve certainly not relied on that to get on with my own business and do what I wanted to do.”

Appelbaum explains to host Eleni Giokos that she learnt a lot from her father but her work ethic was something she had to develop independently: “He certainly taught me a lot about business, but being a girl and growing up in the 1970s [meant] there was not much expectation [for] me to do anything. It was my choice to do something. So, I have always worked and I have always been busy.”

In 1994, her and 10 other women started Wiphold, an investment company that empowered women from all walks of life. Appelbaum reflects fondly on her time there: “Wiphold was one of the most wonderful experiences of my life… We empowered women that were technically completely disadvantaged, really empowered them to understand how to invest and take a little bit of money and make it a lot. There was an incredible amount of energy in that boardroom. I’ve never been in a boardroom that good ever since.”

It was her work with Wiphold that acted as the catalyst for Appelbaum to start her own business; she explains: “Once I realised that all this experience I was getting across the board, from financials to marketing to HR, I decided I was going to do it for myself and that was when we started De Morgenzon.”

Although starting a wine business was not like anything she had done before, Appelbaum tells the programme how she had always dreamed of doing something she felt passionate about: “I always wanted to farm. I always wanted to live in nature… This gave me the opportunity to do something that I would love.”

When Appelbaum started De Morgenzon, she trusted her gut instincts and it paid off: “I was extremely lucky. I had no idea how good the farm’s ground was. I knew Stellenbosch was the premier wine producing region of the country, but I had no idea that there was this gold in the ground here.”

Appelbaum took advice to keep the old Chenin vines at the farm, which proved to be a profitable decision: “[Chenin] is one of the noble grapes of South Africa. We kept the old vines, clipped them within an inch of their lives and we treated them with respect and care. I got hold of a winemaker, whose expertise was Chenin Blanc, and I said to him: ‘Throw whatever you have at it. I want you to make the very best wine you’ve ever made.’ And he did that.”

It’s not just luck that has made De Morgenzon successful; Appelbaum reveals the wine business’ quirky trade secret to the programme: “We play music to the plants and the barrels. Everything is made and played to music… If you grew up to beautiful music like this, wouldn’t you taste beautiful, too?”

Appelbaum outlines the size of their business to date and her hopes for the future of a company still in its early days: “We make about 750,000 bottles a year and we export about 75% [of that], mostly to the UK and the US… I think we’ve got potential for another 25% growth. I can’t make wine I can’t sell. So, I think one must keep increasing once the reputation is established. Remember, we only bought this farm in 2003, so it’s only 15 years old.”