British entrepreneur Richard Branson, founder of the Virgin Group of travel, music and communications companies, has announced a new philanthropic venture that aims to help put Zimbabwe back on its feet. 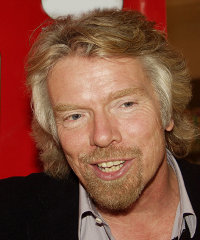 Branson told Reuters that things have changed in Zimbabwe since the unity government was put in place in February 2009. He urged investors to pour money into Zimbabwe, saying it was wrong for the world to deny Zimbabwe the capital it needs to reconstruct after a decade of political crisis and economic decline.

“Zimbabwe is a magnificent country that has had a really rough few years and either the world can continue to wait and see and not invest … or the world can help (Prime Minister) Morgan Tsvangirai and the coalition government get Zimbabwe back on its feet,” Branson told Reuters in an interview. Branson said Enterprise Zimbabwe is intended to function as “a sort of safe haven for people to invest through.”

“In life, people have got to take risks. If everybody waits on the sidelines it will be the people who suffer,” he said. “The present state of politics in Zimbabwe is by no means perfect, but it’s a great deal better.”

“Zimbabwe … just needs a bit of help being kick-started,” he said.

Reports quoted Matambanadzo as saying that as schools and hospitals return to normal operation, the organisation aims to channel donor funding and investment capital to support business expansion.

Bulawayo-based economist Eric Bloch told Voice of America that Branson is doing the right thing calling on investors to take another look at Zimbabwe for longer-term returns.

Supa Mandiwanzira, president of the Affirmative Action Group, a leading Zimbabwean black empowerment group, said Branson and other foreign investors are welcome to Zimbabwe as long as they are ready to adhere to the country’s new indigenisation or black empowerment laws which are currently being implemented. – VOA