At the turn of the century well-off Nigerians struggled to shop in style. Most had to jostle in local markets to buy food or travel to the UK, US or Middle East to replenish their wardrobes. Then in 2005 the Palms shopping mall opened its doors in Lagos’s affluent Lekki peninsula in the commercial capital’s south-east. 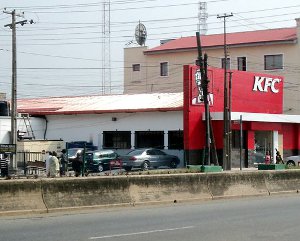 Since then its gleaming interior corridors have housed throngs of immaculately-heeled shoppers who peruse clothing stores such as Puma and Lacoste, stock up their larders in Shoprite, sip lattes on the terrace or head to the cineplex upstairs to watch the latest movie. Nowhere better captures the spirit of the country’s exploding middle class.

The Palms was an investment by private equity company Actis, one of the first to recognise the retail opportunity emerging on the back of Nigeria’s demographic growth. It has gone on to build two other malls. “The opportunity has been about the evolution of the consumer,” says Michael Chu’di Ejekam, Actis’s head of real estate in Nigeria. “The middle class has surged since the mid-2000s. As incomes rose, tastes changed, and consumers were able to demand a different shopping experience in a more formal retail environment.”

In a June 2014 report Standard Bank found that Nigeria accounted for more than half of the total 7.6m middle-class households in 11 sub-Saharan countries. Nigeria’s middle class multiplied more than six-fold between 2000 and 2014, according to the study. Today, by its reckoning, Africa’s most populous nation is home to 4.1m middle-class households living on between $15 and $115 per day.

The growth of that demographic has not peaked: by 2030 Nigeria will be home to almost 12m middle-class households, the report estimates. Going by the National Bureau of Statistics’ average of 5.7 people per household, this would account for over 68m people. “Nigeria’s middle class is bigger than many countries in the world,” summarises Yaw Nsarkoh, Unilever’s managing director for Nigeria.

That means cash to splash. This year, Nigeria will account for 45% of the total $360bn in household consumption expenditure across the 11 surveyed countries, which Standard Bank selected as a proxy for the continent. Unilever, one of the countless consumer goods businesses trying to leverage that opportunity, ranks Nigeria among its global priority markets. Others here include Procter & Gamble, the Dutch milk company FrieslandCampina, and alcohol titans Diageo and Heineken. Also present are food chains such as Johnny Rockets, makeup companies like MAC, and dozens of clothing brands and car dealerships.

Besides the sheer numbers, investors are getting excited about this West African country’s appetite and style. “Everybody is talking about the size of Nigeria’s population and the increasing income levels,” says Bruce Layzell, KFC’s general manager for new African markets. “Obviously this… provides a great consumer base. But what really excites me is that Nigerians are discerning in their tastes, have their fingers on international trends and expect the very best international markets have to offer.”

This is something trendy clothing brands have recognised too. In many cases it was South African groups such as Mr Price that blazed a trail in Nigeria. Now a combination of the demographic draw and the removal in 2010 of a ban on importing finished textiles is luring more international stores. “This is the next wave of retail development,” says Actis’s Ejekam. Labels including Tommy Hilfiger and Salvatore Ferragamo are sniffing out the market, he says.

Retail in Nigeria is a lucrative business for those who get it right. Kamal Mansour, franchise owner of stores including Hugo Boss and Mango, claims that the Mango store in the Palms mall is among the top ten globally for sales per square metre.

Retailers admit to major difficulties, ranging from unreliable power supply to poor infrastructure. “But if you wait for those [problems] to be solved, the cost of establishing a footprint here would be 100 times what it is today,” says Robbert de Vreede, Unilever’s vice-president for brand-building in Nigeria.

Perhaps the biggest challenge is that demand is outstripping formal shopping space. “We are ready to do more stores, but there is no space in malls,” Mansour says. “The problem is the space, not the market.”

To address this gap, Actis will develop at least three new malls in Nigeria in the “near-term”, Ejekam says. “Lagos alone has over 20m people, but there are only two major malls. The city could easily take 20 more malls.” Actis will soon compete with others such as Artee Group, a business house that owns the franchise for the Dutch supermarket Spar. Its first mall is under construction in the southern oil city of Port Harcourt.

As the middle class grows and new malls develop, the formal market will consolidate. “People’s demands change when they move into the middle class,” says Unilever’s Nsarkoh. The Anglo-Dutch multinational still sells most of its products through informal channels. “I think the trade going forward will start to formalise, and at some point we will see a big representation of modern trade in Nigeria,” he adds.

Both Actis and Artee Group say they expect a major evolution in Nigeria’s retail market in the next three to five years.

“When we arrived there was no modern retail,” says Prakash Keswani, one of the founders of Artee Group. “You would go to an open market, you’d struggle to park your car. You’d have hawkers following you. You would have to haggle. You wouldn’t know what you are buying, you’d find fake products, and you’d have to spend half a day going from one shop to another. Nigerians deserve better than that; and they are now getting it.”