At 32 years old, Philip Nyamwaya, the co-founder of Kenya’s Intrepid Data Systems (IDS), marvels at his staff of 17 people. He recalls the time when his fast growing software and mobile payment solutions company could only afford to pay him a salary of around US$50 a month. 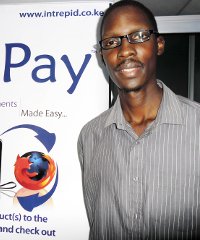 Today Nyamwaya is involved in two companies with a combined clientele of over 120 businesses that use its diverse applications.

The roots of IDS were established even before Nyamwaya entered university. Had he followed his first career choice he would be an architect today. However, a lecturer friend advised him to study computing.

“I owe a lot to that man. I’m happy I took his advice,” says Nyamwaya. In 2000 he enrolled for computer science at Jomo Kenyatta University of Agriculture and Technology (JKUAT). Like most young Kenyan students, he aimed on graduation and to start on a management trainee level in one of the companies in Kenya. “It’s the natural progression here for most graduates,” notes Nyamwaya.

However, by the third year of his studies, IDS co-founder Steve Nyumba connected him to an organisation that needed software developed to run their applications. Nyamwaya’s mentality towards employment changed when on getting paid he realised he made the equivalent of what a management trainee earned, “yet I was working quarter of the time”.

Around 2003, when Kenya just got a fresh political dispensation and optimism was high, Nyamwaya and Nyumba founded IDS. The call by the new President Kibaki for Kenyans to work hard motivated the two young founders to an extent that Nyumba quit his job, leaving a guaranteed salary at a reputable software company, to focus his energies on the fledgling IDS.

In those early days, the entire company was crammed into a small office. To make ends meet, no job was too small or out of scope for the founders. At times when there wasn’t enough money for salaries “we even did hardware maintenance,” recalls Nyamwaya.

His opinion is that startups should not rush to borrow from banks but first consider networks of friends or relatives. “Just because you have a good idea doesn’t mean the bank will buy into it,” he says.

The success of IDS has also been down to the complementary skills of the two founders: Nyamwaya’s core strength is programming and building complex back-end applications, while Nyumba’s talent is web design and development.

In early 2004, a trip to the bus station for the two founders to book a ticket to Uganda served as a catalyst that would chart a clear path of what IDS would eventually specialise in. The bus company had a laborious manual booking system that had the two in the queue for hours. The fatigue inspired them to build a system where one would book online and show up on the day of travel with a ticket. They then built a booking system that one bus company adopted in phases.

However, in 2007 with the launch of the M-Pesa mobile money platform, the dots connected with the founders’ vision. “We saw it as a payment solution for multiple industries, especially in Africa where credit card penetration is very low,” explains Nyamwaya. The breakthrough year was in 2010 when they sold domain names to clients in real time via M-Pesa.

They also partnered with a friend who ran online music website pewahewa.com. This necessitated the formation of a separate company iPay. Their mobile payment application supported the website in online transactions. A number of other companies have since also adopted the iPay system, including the Nairobi Stock Exchange, which uses it to sell historical company stock data.

Enjoying the fruits of hard work

Today Nyamwaya is able to work on his own terms and spend more time with his family. But sacrifices have been made. His view is that for young businesses to thrive requires putting in long hours, not just an 8 to 5 routine.

He also advises startups to take calculated, not rushed, risks. He learned this by experience when his company was moving to larger offices. Initial indicators showed the bank would offer them a loan to finance the move but they declined in the last minute. “It shook us but by God’s grace we got investors on board to finance us,” he says.

Nyamwaya and Nyumba hope to expand to Uganda and other parts of the continent. They are working on a new product that will allow customers to purchase goods over the counter through mobile phones.

Nyamwaya firmly believes in following one’s passions with integrity. What matters, according to him, is drive and an open mind, not pursuing something just because everyone is doing it.