The sub-Saharan African region has provided something of a silver lining in an otherwise broadly felt global economic downturn in recent years, according to the latest edition of the World Economic Forum’s Global Competitiveness Report, which assesses 144 economies. Sub-Saharan economies continued to register impressive growth rates of close to 5% in 2013 – with rising projections for the next two years – below only emerging and developing Asia. 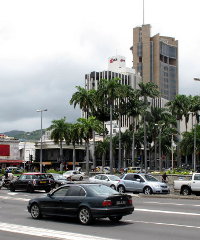 A major road in the Mauritian capital Port Louis.

Yet significant risks remain. More than half of the 20 lowest-ranked countries in the report are sub-Saharan, and many markets have insufficient infrastructure and poor levels of health and basic education. More than a decade of consistent high growth has not yet trickled down to all segments of the population and most economic activity takes place in the informal sector, which employs more than 80% of the population.

The region’s challenge is to turn high growth into inclusive growth and make the transition from agriculture-based economies to higher value-added activities.

The report ranks markets on 12 key measures that influence competitiveness, including infrastructure, education and innovation. The following are the top 10 performers in the region.

1. Mauritius consolidates its leading position in the region this year, benefiting from relatively strong and transparent public institutions, clear property rights, strong judicial independence and efficient government. The country’s transport and communications infrastructure is well developed by regional standards and it is making improvements to the efficiency of its markets. As income per capita rises and Mauritius moves up the value chain, more effort will be needed to develop its human capital by improving higher education and training, and mobilising talent more efficiently, including increasing the share of women in the labour force.

2. South Africa ranks highly for certain aspects of quality of its institutions, including intellectual property protection, property rights, the efficiency of its legal framework and the accountability of private institutions. It also has an efficient market for goods and services. But the country’s strong ties to advanced economies have affected key macroeconomic indicators, and there remains a lack of public trust in politicians and government. Security is a significant concern, health indicators are poor, and higher education and training remains insufficient. Raising education standards and making the labour market more efficient will thus be critical if high unemployment rates are to be addressed.

3. Rwanda has a low GDP per capita by regional standards, but is recognised for its relatively strong institutions and reasonably efficient goods and labour markets. Limited access to finance is seen as the greatest obstacle to doing business in Rwanda, followed by the inadequate education of the work force, the lack of capacity to innovate and poor infrastructure.

4. Botswana’s greatest strengths are its relatively reliable and transparent institutions, efficient government spending, its labour market and low levels of corruption in regional comparison and a sound macroeconomic environment. Heavy reliance on diamond mining renders the country vulnerable to fluctuations in demand, and the quality of education is mediocre. Yet the biggest challenge facing Botswana is health: the country has one of the highest rates of HIV infection and one of the lowest life expectancies in the world.

5. Namibia continues to benefit from a relatively well-functioning institutional environment, with well-protected property rights, an independent judiciary and a fairly efficient government. The country’s transport infrastructure is also good by regional standards and financial markets are reasonably developed. However, infant mortality remains high and life expectancy is low, largely due to high rates of communicable diseases. School enrollment rates are low compared to other sub-Saharan economies. Namibia needs to improve its human resource base to diversify its economy and harness new technologies to improve productivity.

6. Kenya continues its upward trend from last year and is making improvements on almost all pillars of the index, most notably in the areas of market efficiency. Its economy is supported by financial markets that are well developed, and since the adoption of a new constitution in 2010, the government has become more efficient and levels of corruption are gradually decreasing. Education is generally good, though tertiary enrollment rates are low considering Kenya’s shift towards middle-income status. The country’s telephony and electricity infrastructure does not meet the needs of an economy that is the largest in East Africa. Health and security continue to be concerns.

7. Seychelles is one of only a handful of sub-Saharan economies to have noteworthy health and education systems. It has good infrastructure by regional standards, and significantly higher-than-average GDP per capita. Access to finance is the number one barrier to doing business in the country, along with a poor work ethic among the work force.

8. Zambia, like many of its neighbours, suffers from poor infrastructure and its health and primary education provisions are lacking. The country’s business sector is also troubled by a lack of access to finance and by corruption; there is also a lack of technological readiness. Zambia does, however, have better higher education and training provisions – although still low in international comparison – than some nearby economies, and a more efficient goods market.

9. Gabon’s macroeconomic situation is more positive than many other countries in the region, although on most other measures of competitiveness it ranks just as poorly. It also lacks good health and education services and suffers from high levels of corruption. Access to finance is the biggest hurdle to growth for businesses in Gabon, followed by the lack of good infrastructure and poor levels of education among the work force.

10. Lesotho has positive macroeconomic conditions have helped the country climb up the global rankings, though the provision of health and education is lacking, as is the case in many countries in this region. Access to finance and concerns about corruption are the biggest business challenges in Lesotho, along with the poor provision of infrastructure and an inadequately educated work force.