Should Africa’s informal traders be celebrated for their entrepreneurial spirit, or banished in favour of modern shopping malls? 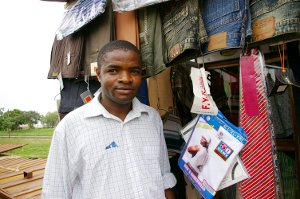 This is how journalist Robert Neuwirth, in his new book, titled Stealth of Nations: The Global Rise of the Informal Economy, describes Ladipo market in Lagos, Nigeria.

Many would view such a market as a mere sign of underdevelopment, instead of an important retail environment. However primitive this way of trading may seem compared to shiny modern shopping malls, it forms part of a global informal economy worth an estimated US$10 trillion. If all the world’s informal operators were to group together in a country, it would be the world’s second largest economy after the US.

Neuwirth prefers not to use the term “informal economy”. He says it is often associated with the criminal underground, rather than a system of improvisation and self-reliance, the do-it-yourself economy.

Many of the merchants also don’t classify themselves as part of an informal economy. They view their activities as an open, independent and admirable exercise in self-reliance. During his first research trip to Lagos, Neuwirth explained to street vendors that he was writing a book about the informal economy. They had no idea what he was talking about. A local, with whom Neuwirth was working, then explained the term to the traders as follows: “He’s writing a book about businesses that exist solely on individual effort, with no help from the government.” This made more sense.

It is hard to generalise about the informal economy as it stretches across a variety of sectors, with traders’ income levels differing widely. A girl that sells water next to the road might make barely enough to feed herself; while those that trade in large quantities of goods from China could earn more handsome profits.

Unregistered informal traders are often condemned for not paying taxes as well as for the fact that some are involved in piracy and smuggling. For example, one of the Nigerian traders interviewed by Neuwirth ships his goods from China to the port of Cotonou in Benin (with minimal customs controls and few restrictions on pirate merchandise), from where it is smuggled into Nigeria. Informal traders are also involved in selling rip-offs of branded clothing and pirated DVDs.

Neuwirth, however, argues that many of these merchants would not be profitable if they had to pay taxes and comply with various rules and regulations. He says for informal traders there is “nothing intrinsically more desirable about registration or licensing, if getting a registration or a licence doesn’t add anything to a business’s bottom line”.

For Neuwirth the issue of piracy is also not black and white. “In much of the world, a majority of people see buying pirated bags, books, or computer programs as a necessity and not a crime. It’s simply a low cost alternative to the high cost of legal and name-brand products. Studies of consumer behaviour in China have shown that people consider the pirated item as just one more choice in the marketplace, and, if they had enough money, they reported that they would buy the real thing rather than the pirated version.”

Cleaning up the streets

In recent years, some African governments have started to clamp down on informal traders. The governor of Lagos State, Babatunde Fashola, has for example, cracked down on street hawkers and spontaneous markets in order to improve traffic flow.