Egypt is one of the largest markets in Africa. A population of more than 86m makes it an attractive market in the Arab world. 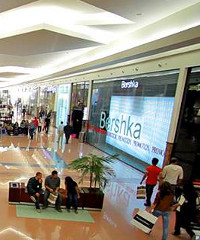 The Mall of Arabia in Cairo

The youth population, and its continuous exposure to social media, is driving the economy. They are educated, open minded and technologically savvy. Social changes, alongside the emergence of a more financially-comfortable middle class, have transformed shopping behaviour.

Moreover, by 2018, more than 72% of households are expected to be in this middle-income bracket, which represents the key demographic for increased future household spending.

When we look at the different sectors in Egypt – automotive, real estate, healthcare, media, telecommunications, etc – we find, by far, the retail market is the fastest growing. Retail sales have registered a compound annual growth rate (CAGR) of 14.2% between 2007 and 2011, reaching US$103bn. In fact, Egypt ranks 13th as the most attractive retail market worldwide.

And the retail industry has changed dramatically over the past 10 years. Back when I still went to school, I could only shop when I travelled abroad. I remember having to wait till my summer vacation to travel with my family and shop for the season, if not for the entire year.

Another alternative was to go to “open days” where someone (most likely in the same social network) would travel, and come back with suitcases of shopping and offer them for sale at an open day. Today, the situation has entirely changed. With the opening of Citystars, Mall of Arabia and Cairo Festival City and many other shopping outlets, the international brands are now all available in Egypt.

Ahmed El Naggar, the vice chairman and CEO of The Nile Projects & Trading Co, says the retail industry has been transformed over the past 10 years. Between 2004 and 2007, rent rates in shopping malls doubled due to both higher demand and limited shop space. But later, with more shopping malls opening, rentals dropped. He expects them to further decline in the coming two years before stabilising.

Another interesting insight is the emergence of e-commerce with the evolution of smartphones and internet literacy, especially after the 2011 revolution. If we look at the number of Egyptian users of Facebook for instance, we find that it increased by 41% from 2012 to 2013. Not only did it cause a significant social shift, but it also familiarised Egyptians with the idea of e-commerce. Nowadays, people start up businesses entirely through online platforms.

So in spite of the political instability in Egypt in the past three years, the retail sector has managed to maintain positive growth.

The franchising sector’s evolution, for instance, supports the growth phenomenon. The number of international brands went up from just 25 in 1999 to 360 in 2010, and in the face of political and economic upheaval following the 2011 revolution, it reached 430 in 2012.

Groceries also represents an important sector of the retail industry. In 2013, grocery retailing showed a return of confidence in the market, and it increased by 9%; a further improvement on the 7% growth in 2012.

To round off, Amr Adib, an Egyptian television host with one of the highest number of viewers, states that businessmen and politicians are “highly optimistic” about the political and economic future of the country. The new government is expected to bring stability to the country, which will eventually be reflected in consumer spending and confidence.

Dalia Abdellatif is an analyst at Infomineo