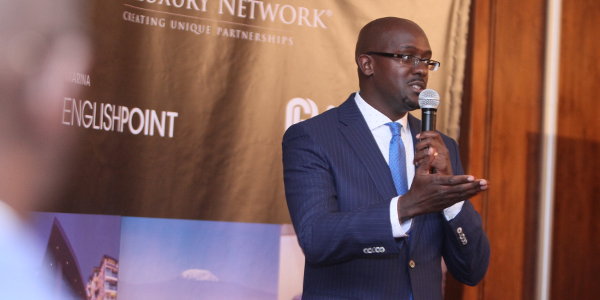 The approval by the Kenyan government of the plan for the city and, in 2009 the purchase of 5,000 acres at Malili Ranch, led to a growth in demand for property nearby. Wangwe, with financial support from friends and family, took advantage of the opportunity to acquire 15 acres of land in the surrounding area, which he then subdivided and sold.

“When I came back to the country in 2009, a lot of the people I was interacting with were either looking into purchasing a piece of land or had already purchased one. With my earlier experience in real estate in the US, I saw an opportunity to exploit this further,” says Wangwe.

Leveraging the concept of land banking – buying land and waiting for its value to increase – the company acquired additional land in the tourism and agriculture-rich Amboseli, Nanyuki and Elementaita areas.

Wangwe is always on the lookout for raw, undeveloped land in the next up-and-coming location. Land that fits this bill is usually located hundreds of kilometres outside of Nairobi, and using experience and research, Wangwe is able to discern the good investments from the bad.

Kenya’s newly devolved government has also helped, opening up opportunities for developments in the counties and further driving demand in these areas. The process of devolution, introduced in 2013, divided the country into 47 counties, each with its own local government and county headquarter. These county headquarter cities have experienced an influx of government officials, which has subsequently led to greater commercial activity and economic growth.

Noticing that tourism is shifting from the traditional coastal areas around Mombasa to inland locations and that consequently land in these areas has begun to attract a higher value, Wangwe has also been actively trying to drive a market shift by encouraging his customers to look to these new places for investments. Plans are underway to start developing property, too, tapping into the growing demand for long-stay holiday units in these new tourist locations.

Goshen sells only land that it fully owns. This safeguards customers from some of the risks associated with land acquisition and has helped the company gain trust in the market. In an industry riddled with fraud and decreasing levels of trust, Wangwe ensures that he follows due process in the acquisition and subdivision of the land.

“It takes longer to acquire the land but in the long run, this is what we want to be known for in the market. We ensure all legal and cultural issues are addressed beforehand to avoid short-changing our clients,” he says.