The Eastern and Southern African Trade and Development Bank (commonly known as PTA Bank), Standard Bank (the parent bank of CfC Stanbic) and HSBC have raised US$ 300 million (Ksh24 billion) through issuance of a Eurobond. The Eurobond started trading at the Luxembourg Stock Exchange following conclusion of the deal. 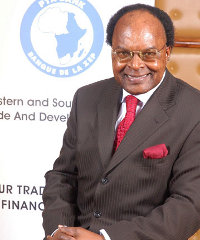 The landmark Eurobond was structured and placed in the London market by Standard Bank and HSBC.

The US$300 million Eurobond issued by PTA Bank is the first of its kind from an east African issuer and the first Eurobond issue in Sub-Saharan Africa since 2007. The issue which is listed on the Luxembourg Stock Exchange, forms part of a Ksh80 billion (US$1 billion) Euro Medium Term Note (EMTN) programme under which bonds will be issued in tranches over the coming years.

Dr Michael Gondwe, the President of PTA Bank says that the rationale for the US$1 billion programme is to diversify the Bank’s resource base and to raise funding to meet the financing requirements of a growing pipeline of small and medium size enterprises in the Eastern and Southern African region.

“The international bond issue marks an important milestone in the bank’s resource mobilisation programme and is the first step in the implementation of a long term strategy of engagement with international financial markets to access long term capital. In addition to setting a precedent for other potential issuers in our region, the bond also reaffirms the bank’s developmental mandate of attracting capital flows in support of private sector development in its member states,” said Dr Gondwe.

John Ngumi, the director of investment banking for Africa at Standard Bank termed the deal as a milestone in that it opens up another source of debt financing for African governments and corporates as they seek to diversify funding to accelerate economic development.

“This historic transaction also illustrates the growing capacity of African based financial institutions to originate structure and place successfully complex international financial transactions. The deal came about through the close cooperation CfC Stanbic Bank has with PTA Bank; and we were able to mobilise expertise from Kenya and, through Standard Bank and HSBC, in London to conclude it successfully,” he said.

Following the success of the issuance, Andrew Dell of HSBC, the joint lead manager, said that the “deal was very well executed and dropped cleanly into the tight market window”.

“This is a very important transaction for both the issuer and Africa more broadly. Development and trade finance has huge impact on the real economy and hence is a significant enabler of economic growth in and of itself,” said Dell.

A Eurobond is very similar to the corporate and government bonds already familiar to investors and users in Kenya, the key difference being that, unlike domestic bonds, Eurobonds are issued in the international market and sold to investors worldwide. London is the principal base for the issuance of Eurobonds. Eurobonds are typically denominated in international currencies, and the PTA Bank bond was denominated in US dollars.