Takoradi, a small coastal town on Ghana’s west coast, is emerging as one of the new hotspots for African property developers. 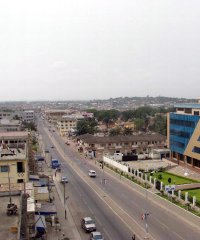 Takoradi is set for an economic boom

Wayne Wright, South African property group JHI’s director for business development in Africa, told delegates during a panel discussion at the recent African Congress of Shopping Centres in Cape Town, that Takoradi and Ghana’s greater Cape Coast region is one of the next business opportunities in Africa.

The reason for Wright’s enthusiasm is that the twin city of Sekondi-Takoradi will be home to Ghana‘s emerging oil industry that is expected to start production before the end of the year. Takoradi Harbour is the nearest commercial port to the country’s newly-discovered offshore oil fields.

“I think one of the big drivers in Africa is where liquid gold is being discovered. I mean oil drives a lot of things,” said Wright.

“Sekondi-Takoradi on Ghana’s western coast is dusting off her dance shoes to get ready for the good times. The city has passed its prime and some even say it’s a ghost town. But a promised oil boom means people are blowing new life into Ghana’s main twin city,” the Accra Mail wrote in an article recently.

Arnold Meyer of Renaissance Partners agreed with Wright, saying that even though many people have not heard of Takoradi, it is “the future of oil in Africa”.

Besides Ghana, Meyer is also excited about opportunities in the Democratic Republic of Congo (DRC) and Ethiopia. He said the DRC is currently receiving a lot of interest from the Brazilians.

“The other one that probably holds most potential is Ethiopia. After Nigeria it has got the second biggest population on the continent, just short of 100 million people. It has got the highest economic growth rate in Africa. It is an economy on the cusp of a boom,” Meyer explained.

Another panelist, Franc Brugman from Bentel Associates International, said that in addition to countries like Nigeria and Ghana, there are many other smaller territories such as Cameroon that hold good potential. “Everyone thinks that [Cameroon] is French speaking, but . . . if you go into it you’ll see that it is a bilingual country, and yes, a shopping centre in [each] of the two major cities will work.”