With Africa being referred to as the last investment frontier, and its growing, underserviced consumer class gaining the attention of foreign retail companies, the continent has seen an increase in demand for formal retail infrastructure and office space. 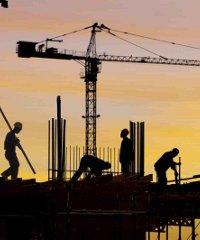 South African-based Broll entered Nigeria in 2004 and has nine years’ experience in the commercial property services sector in sub-Saharan Africa.

“I think that certainly one of the biggest challenges is the depth of skilled and experienced staff that is lacking,” said Michau. “There are certainly pockets of excellence, I have to emphasise that, but you will find that in the case of retail management, facilities management or corporate advisory, you will definitely find that there is not that depth of skills or experience.”

He added that local service providers, such as a company that maintains office elevators, offer a service that is not always up to international standards, although “over the last couple of years there has been a definite improvement in terms of standards and quality”, he acknowledged.

Another area that can be limiting is the legal system. “I’m not saying it doesn’t work, but it can be extremely slow and therefore there is a tendency to try avoiding going to courts,” he added. “You can be strung out for many years so that can be a challenge in terms of arrears.”

According to Michau, the facilities management requirements can also be “extremely onerous” in African countries outside of South Africa. For example, many developments will have their own purification works, sewerage purification plants, generators, water tanks and pumps on site, which places extra responsibility on the managing agent to maintain that equipment.

In terms of leasing, Michau said there can be high expectations from landlords and onerous lease terms, particularly in the retail sector, where there is a lack of comparative information. In addition, it can be difficult to find quality retailers and country franchisees with the necessary experience and balance sheets.

One of the biggest risks in property development in Africa concerns land titles determining who actually owns that land as developers run the risk of land claims later on, said Michau. Raising finance is also a challenge, he said. “Your risk profile is different there, so, in fact, there is a huge amount of risk as financiers. So it can be quite expensive and also the duration of that finance is generally over a shorter period.”

He added that building and land costs can be “unrealistically high” which can create challenges in trying to get the financial model right. In addition, he believes it is more difficult to secure pre-letting in office space in areas such as Nigeria and Ghana than in South Africa. Michau explained that developers do not want to build on speculation and will often secure land but only start development subject to a pre-let. However, it is difficult to secure pre-letting as there has been a legacy of building delays in places like West Africa. “So nobody wants to commit to a pre-let there that is two years down the line still.”

According to Holden Marshall, managing director of Resilient Africa, a property developer focusing on shopping malls in Nigeria, the single biggest challenge they face is securing land. “The town planning of Nigeria has not been ‘first’ world, for want of a word,” explained Marshall. “The population growth and the substantial growth of these cities have been such that any piece of land that is vaguely buildable, or remotely buildable on, has been developed. What is left are largely swamp areas or really steep slopes or undesirable land in the greater urban areas. Finding a suitable site is probably our single biggest challenge.”

Building delays are still very much a challenge in respect to zoning rights, environmental and building permits, and unreliable local supply chains. Michau estimates that around 70% of building materials have to be imported into many countries in Africa, which means developers are exposed to foreign exchange fluctuations.

Corruption is also a problem for developers importing their building materials. “You are dealing with the ports as well, which are certainly a haven for corruption,” explained Michau. “So the infrastructure around there can result in delays.”

Broll will be presenting at next week’s Africa Property Investment Summit held in Johannesburg. The two-day event, taking place from 3-4 September, will be held at the Sandton Sun Hotel. For booking information visit www.apisummit.co.za.