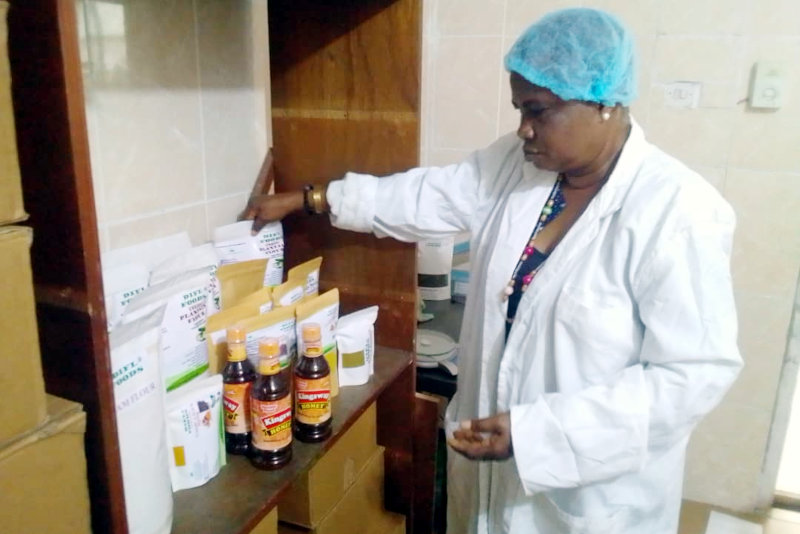 Bosun Solarin retired from the Nigerian civil service in 2004 and spent over a decade running a laundry business. She had no background in farming. In May 2017, deciding to take the plunge into agribusiness, Solarin bought a parcel of land in Ogun State, around 50 kilometres from the centre of Lagos, and established Dasun Integrated Farms. Starting out by processing plantain flour, the company today supplies a variety of food items, including spices, honey and fish.

“If anyone had ever told me I would go into agriculture, I would have said they must be dreaming,” says Solarin. Her interest in the sector only came about after watching a documentary on television, then attending a seminar where the leader pointed out Nigerians spent 60 billion naira (about $146.5 million) on food every day. At this point, Solarin realised the opportunities in agriculture were vastly more than those available through her laundry business.

Unable to access family-owned land, Solarin acquired a five-acre plot through a developer who bought 50 acres of land for the purpose of starting a farming estate. By the end of 2017, she was growing plantain. The crop is relatively easy to maintain and keeps replacing itself; it is popular fried or in its roasted form known as boli. Her plantain crop was followed by banana and papaya.

From the start, Solarin was proactive in seeking out support from organisations that offer training to Nigerian businesses. Assistance from the International Trade Centre’s SheTrades initiative, which promoted spice-growing in Nigeria, was key to her decision to start growing spices such as ginger and turmeric in 2018.

Solarin spent the first years of her venture wrestling with labour issues. After realising she couldn’t afford to keep paying workers for long periods before her crops were ready to sell, she began to experiment with cucumbers, a fruit harvested within as little as 45 days after being planted.

Yet, Solarin found the workers she did hire to be unreliable. After coming from Lagos to inspect the farm, she discovered that “These guys were not doing anything. The cucumber was not doing well.” Solarin eventually decided to use a relative to organise operations and supervise the labourers. Rather than employing permanent staff to tend the crops, the farm now hires workers for only short stints at a time.

The idea had always been to start growing crops and to expand into processing. Solarin had already received a loan for irrigation and a farmhouse through a government initiative and by 2019, she had to decide whether to accept a 10 million naira (about $24,400) loan to construct a processing facility to turn plantain into flour. However, the financial risk was too high. “It just dawned on me one day … how will I pay it back?”

Solarin cancelled the loan application and instead, in October 2019, she took her plantain to be processed at an incubation centre run by the Nigerian government at Odogbolu, around 40 kilometres from her farm.

But just as Solarin’s food processing business, branded as DIFL Foods, was taking off, the arrival of Covid-19 threatened to upend its progress. Solarin was unable to visit the farm for three months. When she could finally return to the site, she was met with “devastation”. Bush animals had chewed through the pipes of her irrigation system and locals had been siphoning water from her tank. She had no insurance to compensate for the damage.

With her 1 million naira (about $2,440) irrigation equipment in disrepair, Solarin’s crops were fully reliant on the weather. With climate change accelerating, rainfall patterns are increasingly unreliable. The delay in the arrival of the rainy season in both 2020 and 2021 was disastrous for Solarin’s plantain crop in particular. In February this year, says Solarin, “Out of about 3,000 plantain trees, I could barely count 500 standing.”

Today, DIFL Foods has developed 35 products. The most popular are the plantain flour and a turmeric, ginger and garlic mix. While she processes mainly crops grown at Dasun Integrated Farms, Solarin has expanded her offerings by marketing honey – which makes an ideal sweetener to go with many of her other products – and locally caught crayfish and catfish. Her distribution channels have expanded to include various online platforms.

DIFL Foods operates in a crowded price-sensitive market. Solarin’s competitors start with local farmers selling their goods at markets in Lagos. While determined to compete on quality, some of the company’s products – such as yam flour – are designed to appeal to customers with lower incomes. Solarin fears the African Continental Free Trade Area will further expose her business to low-cost competition from other African countries.

Now that several of her products have been certified by NAFDAC, the Nigerian food safety agency, Solarin claims to have “people who are ready and waiting to become resellers”. This will open the door to DIFL Foods being sold at supermarkets. Solarin expects high transport costs to restrict her market within Nigeria to the Lagos area, although the company’s turmeric powder is about to be launched on Amazon, marking the beginning of a foray into the export market.