Africa’s growing population is urbanising fast. In fact, according to the United Nations, Africa will have around 760 million urban people by 2030 and by 2050, this number is expected to grow to 1.2 billion people. This rapid urbanisation is putting further strain on the continent’s cities, which are already suffering from poor infrastructure. 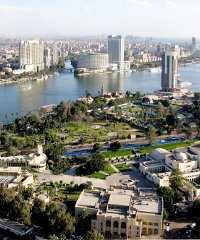 Cairo is one of Africa’s three megacities

During a recent KPMG Africa Conversations panel discussion, titled Prioritising Africa’s Megacities, the challenges and opportunities surrounding developing Africa’s megacities were debated. A megacity is defined as an urban area with a population of at least 10 million people. There are currently only three African cities – Lagos, Cairo and Kinshasa – that can be defined as a megacities.

DeBuys Scott, head of infrastructure for Africa at KPMG, added that it is predicted there is going to be 1,000 new cities built on the continent by 2050. “Now that’s a staggering number if you think about it,” he said. “There are merely three megacities at this point in time. That’s expected to also change quite substantially.”

However, the core issue surrounding the growth and development of African cities is infrastructure. According to Andile Skosana, associate director for government advisory at KPMG, the fact that the continent’s infrastructure development in its cities comes from a low base means that Africa has the potential to be innovative.

Skosana highlighted that in most cases, African cities are seeing a rate of urbanisation that far exceed the rate at which they can provide the required infrastructure. While he agrees that cities are becoming as prominent – and even superseding – countries, he added that they are becoming more difficult to manage.

Bannister said that one issue African cities face is that, in most cases, their exact population is unknown, making it difficult to determine infrastructure needs and capacity. “The enumeration of people in shack settlements is enormously difficult and many cities don’t consist of just the city itself but of a kind of hinterland of people who’ve also come to try and get into the city. So although the administrative boundaries may say we have five million people, there are many, many more – and more people are arriving in cities all the time.”

She added that this can have a negative impact on the business environment in these cities. “Probably 80% of people living in cities have some access to water but I think that the statistics show that less than 40% have access to sewage – and those kinds of things cause huge health related problems. They mean the people are not as productive as they could be and they also mean that businesses can’t function as well as they should be.”

Skosana, who has been involved in establishing and conceptualising the Gauteng Integrated Development Plan and the Human Settlements Strategy in South Africa, agrees that lack of data is the biggest challenge institutions have in Africa’s city development. “Knowing what to plan for and how much of it do we need… But in organisations I would say once the plans are there – and arguably there’s quite a lot of plans, we have done a lot of planning – there is not enough people to be able to convert that into something that is on the ground. To take the money, spend the money appropriately, get the deliverables, get the outcomes that are required to make our cities work a little bit better.”

According to Scott, another major challenge is in securing investment for these infrastructure projects. “I think that one point that is very important to make is that the perceived risk profile of the African continent is extremely negative,” he added. “It’s a very different story on the ground. It’s important to go to the specific areas, to the specific cities, understand how do they manage these risks themselves – and its a very different risk profile than what is often perceived.”

Bannister argued that the solution to successfully developing infrastructure projects in urban centres can come from African cities learning from each other. “Possibly one of the best ways we could have of improving development is learning from each other’s success stories. In many cases our lessons have come from the UK, the States, developed countries like Australia, but I think there is a lot to be said from Africa learning from other African countries because we share many of the same problems and we kind of have an understanding of the same kind of issues. So I think that would be a great place to start – just a learning platform where we can learn from one another’s mistakes and successes,” she suggested.