Get involved in what is going on around you. This is the message and philosophy of South Africa’s Gugu Msibi, a senior partner at Ernst & Young who has created a name for herself as one of Africa’s foremost woman leaders. Having recently been named as one of the World’s top 100 Dynamic Women by Arise magazine in the business and law category, Msibi is no stranger to receiving recognition for her work. Last year she was recognised as a Young Global Leader by the World Economic Forum, and she also made the Forbes’ 20 Youngest Power Women in Africa list. 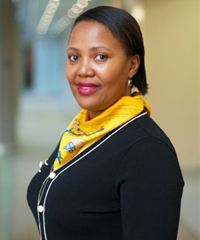 Part of this recognition lies in the success of her role in advising government ministers across the continent, particularly in Nigeria and Ethiopia, at Ernst & Young. Having started her career as a political journalist at the South African Broadcasting Corporation (SABC), she moved into government as a marketing and communications executive at the State Information Technology Agency before co-founding communication strategy and media management agency, Spin Media, in 2000. She took on a position at Ernst & Young four years ago before being promoted to the Africa head of strategy and public affairs, a position she still holds today.

“So I slowly moved into the corporate world and I left the journalism background but it has always been something that is close to my heart,” Msibi told How we made it in Africa. “I still write. I write my own blogs. I am not necessarily operating as a journalist right now but that’s my first love.”

Msibi believes that her journalism training and experience is responsible for her curious mind, which she said gave her an understanding of what is happening in the world, particularly in South Africa. Msibi decided to react to what was happening around her and refused to just be a spectator, a characteristic she strongly believes all Africans, especially women, should adopt. She has been involved in a number of political and social initiatives, such as setting up South African trade union federation COSATU’s Corruption Watch, which launched at the beginning of this year.

“I found that just knowing everything that is happening around you and keeping your mind agile has always given me the competitive edge,” stressed Msibi. “And when it comes to tackling those challenges that humanity will face in the future, exceptional levels of commitment are required.”

Msibi, who is also a fellow of the Africa Leadership Initiative in South Africa and a member of the Aspen Global Leadership Network, believes that the answer to unlocking Africa’s potential lies in what she calls authentic leadership. “I think leadership can be based on many different principles, you know, fear, hierarchy, rewards, just to name a few. But the great leaders of the world, if you look, have chosen different approaches. I think for me the answer would be dignity-based leaders because ultimately we admire those people who serve something larger than themselves in life. You don’t want to have a leader who is all about themselves.”

“I think of Mahatma Gandhi, I think of Nelson Mandela, I think of Martin Luther King, I think of Desmond Tutu, and if you look at what all these people have in common, it’s that they devote their time to a greater purpose,” continued Msibi. “They wanted to make sure that everybody’s potential has the chance to be fulfilled to its maximum and I think that is what Africa needs. It needs those kinds of leaders.”

Msibi believes that this kind of authentic leadership in politics is also required in Africa’s business environment. She is passionate about the role of education in Africa, and strongly believes that good education systems hold unlimited power and potential for the continent. “I look at a country like Zimbabwe and I see what many years of prioritising education has done for the country and I think to myself, with everything that is not going right in Zimbabwe, the one thing that everybody still talks about is the education system that they set up,” she added. “I’ve got colleagues that come from Zimbabwe and I can tell that their work ethic is really something and I think that it comes from a very solid educational background. So I’m very passionate about [South Africa] getting the educational system sorted out. I can only imagine what it would do for our country.”

Msibi feels that the continent’s women leaders have been too quiet over the last ten years. “That’s quite saddening because if you look back at history, and maybe specifically focusing on [South Africa], the voices of reason behind these very tall, big men, were the women,” said Msibi, who urges Africa’s women to get more involved in the future of the continent.

“I’ve just found that the voices of women, in our time in Africa, are just conspicuously quiet and that concerns me. I pose that question to myself as well because you can’t point fingers and say, ‘this and this is not happening’. You know, you are supposed to question; if not us, then who? So I would say we all need to get involved.”

However, Msibi, a single mother of two young boys, believes that women can be stronger leaders than men, especially in a time of crisis, because they put their hearts and souls into what they do. “I know the males are going to kill me for this, but it’s the truth,” she laughed. “I just find that we tend to be emotionally involved when we believe in something and I think that it is time for us as females to get involved in all levels of economic development of our continent, and of our country.”