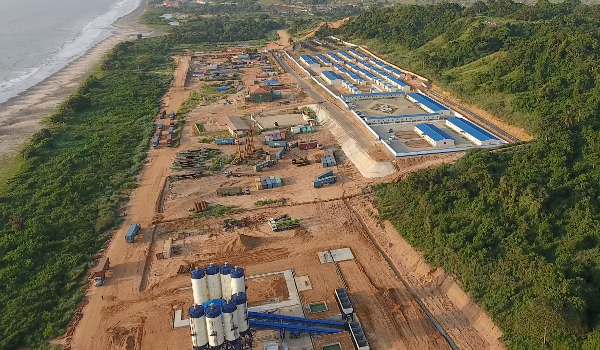 Port of Caio today announced that the Port will commence full operations in the first quarter of 2019, one year ahead of the original schedule. The construction of the deep-water port has gained momentum due to the strong support provided by the Government of Angola, Ministry of Transport, Provincial Government and China’s Export-Import Bank.

The Port achieved significant physical progress on the construction schedule ensuring full operations can commence in 2019 first quarter, which is earlier than projected. Once fully operational, the Port will boost cargo handling capacity making exports much easier and more cost-effective with a projected increase of trade by at least 30% and around 1,600 direct jobs for the operation of the deep-water port.

Praising the support of Government and private sector in this mega project, Jean-Claude Bastos de Morais, major shareholder in Port of Caio, commented, “Africa’s significant infrastructure needs can be addressed by embracing the PPP model, which will help attract more private investment in sectors such as ports, roads and highways. We look forward to exploring more developmental opportunities with Governments across Africa. We will continue to play an important role in the transformation of the African economic model, where economic diversification, robust economic growth and sustainable employment all become a near-term reality providing enormous benefits for ordinary Africans.”

China Road and Bridge Company (CRBC) has been contracted to build the port facilities and have hired local labor to construct and build the port, thus creating real jobs for ordinary Angolans. As a public private partnership (PPP) – the first of its kind in Angola – the port represents a transformational shift in the country’s determination to invest in long-term economic growth that positively impacts the local and national populations; and the wider region. Once completed, the Port project will be a major trade gateway between Angola and the rest of Africa and beyond, becoming an engine for economic growth, raising living standards and creating real economic opportunities.

The ideation, design and project management of the deep sea port commenced in 2007. After a five-year investment period, the management company (Caioporto SA) was awarded a concession that included the design, financing, construction, operation and maintenance of the Port. Extensive feasibility studies were carried out and preliminary costs have been invested into the project to build a best in class deep-water port that will act as a catalyst for increasing economic prosperity for all stakeholders. Now under construction, the Port of Caio is an investment that represents a significant step-change in the country’s transport and logistics capabilities, positioning the nation as the new west-coast gateway to the African continent.

About Port of Caio

Port of Caio is the world-class port facility, integral part of a new infrastructure program of the Government of Angola emerged out of a public-private partnership with the pioneer company Caioporto SA, based in Angola. Caioporto SA was awarded the concession to finance, plan, design, build and manage the Port of Caio, under the terms and conditions agreed upon in a concession agreement prepared in collaboration with the Ministry of Transport.

Once completed, the Port of Caio, together with the other existing ports in Angola, will redefine conventional notions of trade with Angola. The new project is directly aligned with the plans of the Government of Angola to rebuild the national infrastructure and serve as a catalyst for regional and international cooperation through the implementation of maritime, rail, road and port transportation programmes. The launch of Porto de Caio will generate significant revenues for the region and serve as a key factor for the economic development and job creation.