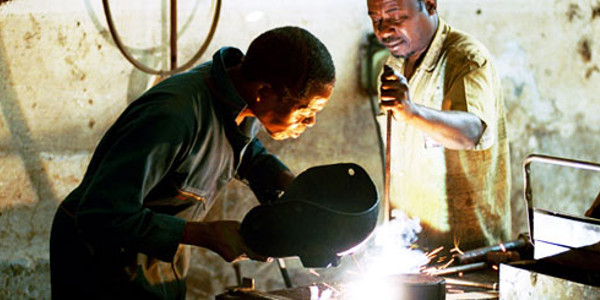 During the period of relative stability since the start of this century, the African continent has experienced rapid growth and has indeed outperformed global growth trends. As a result, its gross domestic product (GDP) has significantly increased and has brought wealth to many countries. However, most African countries that have enjoyed high growth recently, are mainly mono economies. Blessed with many natural resources, their economies have greatly improved, but they still remain at a subsistence level and have not moved beyond.

Despite the high growth rate, industrialisation in Africa has barely taken root. Besides South Africa, the most industrialised African country, and barely a few others, large-scale industrial manufacturing is practically nonexistent. Thus, for Africa to grow to the next level, it is critical to examine the reasons why the continent does not seem able to gather momentum for high value-added manufacturing activities.

The main reason cited by foreign and domestic investors for putting off or even avoiding major investments in the manufacturing sector, is the perceived lack of political stability in Africa. While the development of the capital-intensive manufacturing sector requires a long investment cycle, the political lifecycle may be very short-term. As a result, it is very difficult for the government of the day to implement a coherent long-term economic strategy with all the relevant economic frameworks and policies that will only bear fruit long after their term in office has expired.

Although Africa has great potential to develop its manufacturing sector, the political leaders need to have a clear economic vision to develop sectors in which their respective countries have sources of competitive advantage. Without a conducive environment supported by the relevant economic framework, there are no significant incentives for potential investors to commit themselves.

Most of the time, political factors trump economic factors. African political leaders conduct their own type of populism, where they need to satisfy their majority supporters to win elections and remain in power. For instance, South Africa implemented its Black Economic Empowerment programme, where the scale of corporate ownership and management control by the majority black community is mandated by law. To be fair, this is a necessity to address the imbalances brought about by past injustices of the previous apartheid government.

Another example is in Tanzania where President John Magafuli and his government have slapped US$190bn of back taxes, interest and fines on Acacia Mining, a subsidiary of Barrick Gold, the world’s biggest gold mining company. Powerful mining companies may have been able to squeeze out the best deal from the government of the day, but to see contracts and deals rescinded overnight by another incoming government, cause alarm bells to ring about the rights and protection of foreign investors. All these political actions are seen as major political risks.

The need for proper infrastructure

Another major impediment for the development of manufacturing in Africa, is the lack of proper basic infrastructure. Although Africa has a large pool of inexpensive labour, without infrastructure, the costs of doing business rise significantly. As a result, the comparable advantages that African countries might have, become less relevant.

Access to consistent and reliable sources of public utilities is a major stumbling block, with most African countries suffering from a dire lack of this type of infrastructure. Since manufacturing requires a massive amount of power and water, potential investors must plan to be totally independent and have all their own ancillary activities supporting their main manufacturing operations. These add an enormous extra cost on top of the main investments required.

Logistics and connectivity to markets are other additional costs. Potential investors will be taken aback to find that doing business in Africa can in fact be very expensive. Not only are the costs of transportation and logistics significant, but the time for the goods to reach the final destination can be long, since with low connectivity of seaports and airports, point-to-point shipping frequency is lower.

Although a large pool of labour is readily available in Africa, modern manufacturing requires a relatively educated and skilled workforce. This can be another major obstacle for the manufacturing sector. Unlike in the past, modern factories are now highly automated and skilled workers are required to operate and maintain the machines, while the production operations may be non-stop.

Due to the lack of operational know-how and local management expertise, potential investors may have to not only employ expensive expatriates to manage the operations, but also plan to have their own training centres to inculcate and impart relevant technical skills to their future workforce. This will require both extra time and money before even starting the operations.

By and large, the level of digitalisation in Africa is relatively low. This means that not only is technology adoption comparatively lower, but the digital maturity and sophistication of the majority of the population is limited. As a result, the ability of the local workforce to understand the various complex processes to manipulate and operate digital software running the machines, will have to be constantly enhanced through training and development.

The low digitalisation level is also due to the prohibitive costs of broadband access in Africa. With cheaper and better connectivity, African countries can easily bridge the technological gap. As for the local workforce, although the learning curve will be steep, relevant training and development will eventually provide them with the required level of skills.

For the manufacturing sector to fully develop, there is a need for access to attractive potential markets to trade the manufactured goods. African countries are definitely not leveraging enough on the various trade agreements that they have with developed countries in Europe, as well as the United States. These trade agreements provide preferential market access for manufactured goods from the various African countries. They can also be used as an incentive to attract potential investors in the manufacturing sector and they will eventually support its further development.

Moreover, most African countries have grouped themselves together within the various regional economic communities (RECs). Although the regional markets within Africa can be very attractive for the manufacturing of goods, intra-African trade is relatively low. Despite the fact that African countries want to have better economic integration, not only is the movement of Africans between countries hampered due to visa requirements, but their respective governments may also impose tariff and non-tariff barriers on goods from neighbouring countries, while claiming to protect their own indigenous industries.

The paradox is that while some countries are putting up trade barriers for goods from other countries within their RECs, they may be importing similar products from other countries outside Africa. Hence there is a need for countries within the RECs to collaborate and leverage on the competitive advantages of each other, to give greater impetus to their respective manufacturing sectors. Subsequently, they can trade complementary goods within themselves and even substitute the more expensive imports from outside Africa.

Nelson Mandela said: “Education is the most powerful weapon which you can use to change the world.” One of the simplest ways to support the long-term development of manufacturing is for the African governments to invest in education and human development of their respective populations. This will be the biggest gift of the current governments to the future generations to come.

To spur the growth of manufacturing within the African continent, the respective governments must acknowledge the various challenges and work towards fostering a more attractive environment. They should also have a clear economic vision going forward and must be committed to contribute and support its development, even after their terms in office have expired.

While there are many challenges for the manufacturing sector in Africa, many opportunities await those who dare take on the risks. Recognising some of these challenges will therefore make one better prepared to face and overcome the obstacles going forward.