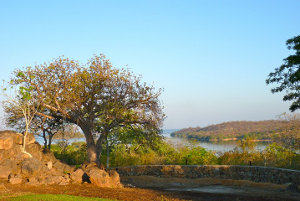 Dawn Brown, co-owner of the “A Turistica” project, has recently launched the marketing, through Pam Golding, of a unique 30 ha hotel development on the shores of Cahora Bassa. The approved CPI provides a niche opportunity for the first combined business and recreation hotel of this nature in the region.

According to the plans, the main complex will house the reception, lounge, restaurant, bar and outside seating verandah overlooking green lawns and an infinity swimming pool onto a magnificent westward view of the lake. The conference centre, although attached to the main complex, has its own entrance. There are 60 double rooms (6 blocks of 10) that are spread along the ridge, providing private views of this scenic area.

Besides relaxing by one of the two pools and bar areas there will be many activities on offer. Full or half day guided fishing charters will give guests the opportunity to fish the various species well known to the lake. There will also be sundown cruises or excursions to visit some of the local industries like the croc farm, kapenta fishing operations or artisanal fishing villages and on to the hotel’s 10 ha north bank venue for a beach braai.

Set in the picturesque slopes between the hotel and the lake, guests will have access to the 3 green / 9 hole chip and putt golf course and driving range. For the energetic guests, two all-weather tennis courts will be located in close proximity to the existing pool and bar area. Other activities will include rock climbing and abseiling, paintball, mini soccer, bird watching as well as a children’s adventure course.

Development can be started immediately as all necessary documentation pertaining to the project are in hand. The existing infrastructure measuring 1,300 m2 includes large sheds and a functional workshop, staff housing, residence and guest house, thatched lapa and beautiful pool surrounded by lush green lawns and water features.

Gary Aitchison, Dawn’s son lived on the Lake for 13 years with his wife and 4 children and he is the one that had the vision and has been the one on the ground managing the project and turning that vision into a reality. Being proficient in Portuguese and familiar with Mozambican law and business principles, the normal lengthy registration procedures that can be problematic have been dealt with. Although the entire project is for sale, continued assistance will be available to the new owner based on their needs or requirements.

The approved CPI project involves two registered Mozambique companies owned solely by a Holding Company based in Mauritius. The merging of these two companies gives the project 30 hectares of titled land in Nova Chicoa on the shore of Cahora Bassa and a further 10 hectares under license on the North Bank approximately 30 km via water from the main project. This additional attraction could be utilised as a destination for beach braai’s or developed further to complement the hotel.

The CPI approval allows attractive fiscal benefits such as tax incentives and duty and VAT exemptions on most of the building materials, furnishings and equipment. A complete list can be found on the project website www.aturistica.com as well as detailed information of the CPI approval, environmental impact licence, architectural drawings and company structure.

Over the past couple of years substantial value has been added by getting the project up to foundation level, landscaping the grounds, fencing the perimeter (apart from the lake frontage) and installing an irrigation system that involves pop up sprinklers on the lawned areas and overhead sprinklers over the remaining natural bush.

The following statement made by Frank van Hapsburg of ProIntel Africa in the March 2013 issue of the popular Zambezi Traveller says: 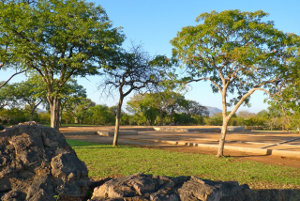 “An important factor to consider when opening a new business in Mozambique, or after it is already established, is how to secure your investment. If one or more shareholders (individuals or corporate bodies) are not Mozambique nationals, it is possible to register the company with the Mozambique Foreign Investment Centre or CPI (Centro de Promocao de Investimento).”

It is said (source www.lakelubbers.com/cahora-bassa-2041) that Cahora Bassa is likely one of the best fishing destinations on the African continent and their opinion (shared by us) is that this pristine giant of a lake has not yet been ‘discovered’ by the larger tourism trade. The article goes on to say that most visitors come to enjoy Mozambique’s beautiful white-sand beaches and resorts along the country’s Indian Ocean coast and never think to look into the interior. Those that do, however, are beginning to spread the word: Cahora Bassa is a destination in its own right and Cahora Bassa is quickly becoming a favourite with photographers and bird watchers, who can always find an unusual target to focus upon along the shoreline. Once Mozambique begins to actively promote the region, tourist accommodations will spring up along the shoreline quickly.

This has proved to be the case as can be testified by those who have been to Moringabay Lodge, Ugezi Tiger Lodge, Casindira Lodge and Nhenda Camp located in some beautiful spots on the lake.

With its unique karoo formations and rift influenced geology, Mozambique is emerging as a future potential source of thermal and coking coal. Two distinct coal bearing sub basins have been identified: Moatize – Minjova basin and Zambezie basin around Tete and this is generating a need to find accommodation in the Tete Province, both on a corporate level and to give respite to the mining community work force.

In conclusion, this report from reporter Anna Nuvunga of BBC News Africa says it all!

Quote: “An early Monday morning at Maputo’s International Airport finds the departure lounge packed with commuters waiting to fly to Mozambique’s booming coal town. Brazilians, Portuguese and Mozambicans, already dressed for work in their company-coloured shirts, are about to board the flight for the 100-minute journey to Tete.”

“Five years ago, there were just two planes a week to Tete, once better known for its searing heat and tender goat meat. Now, there are 12. A combination of rising coal prices, increased demand and in-depth surveys that revealed vast seams of high grade coking coal underground have attracted seven different international mining companies to the area. Production started in 2011 but such is the scale of the coal reserves, once mining reaches full capacity – from 2015 – Mozambique will be vying to join the top 10 coal producers in the world.

“The expectation is that mining will fuel the whole country’s development, and that Tete and its surrounds will become prosperous and thriving.”

Now is the time to invest in Cahora Bassa, Tete Province, Mozambique tourism!