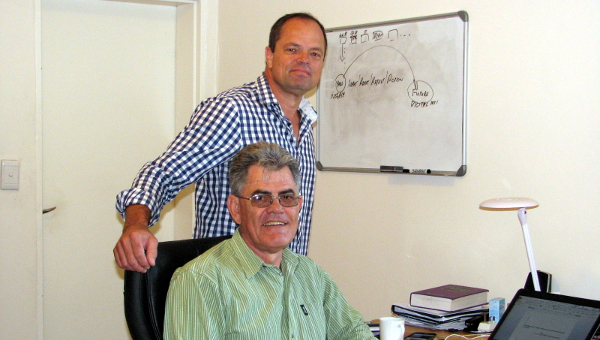 Deon Bezuidenhout and Lucas Greyling (seated) are the owners of DotXML, an IT company that develops the back-end solutions for insurers to target the unbanked, informal trader, typically living on an average household income of US$8 a day.

The traditional insurance industry is still in its infancy in African markets outside of South Africa. With the majority of Africans working in the informal sector – with neither a bank account nor fixed income – the Western contractual life and medical insurance products do not cater to their financial situation. Yet, for those surviving on day-to-day incomes, no one stands more to lose if something prevents them from working.

South Africans Deon Bezuidenhout and Lucas Greyling are two entrepreneurs who have built a business around addressing this problem. Their company, DotXML, develops the back-end technological solutions for insurers, like Old Mutual, to target the unbanked, informal trader, typically living on an average household income of US$8 a day. Its technology has been used by clients in markets such as Ghana, Cameroon, Sudan, Tanzania, Kenya and Uganda.

The duo realised that while low-income consumers were willing to insure themselves against risk, these products needed to cater to their specific social and economic circumstances. They came up with a voucher system, where insurance could be purchased in more affordable packages to cover shorter timeframes. For example, life or medical insurance could be bought to cover just one day, a week, or a month – perhaps while a consumer makes a risky trip to visit family, or simply wants to pay for coverage when he can afford to.

A similar concept is often utilised by FMCG companies targeting low-income consumers, noted Bezuidenhout. Many sell their products in smaller-sized packages – from alcohol to washing powder to baby products.

“Cigarettes are sold one cigarette at a time. [Low-income consumers] don’t buy a pack because they can’t afford it. They buy one cigarette and yes that cigarette is expensive, but they can afford it at that moment in time… Why can’t we offer insurance like that? Why must it be contractual? Let’s offer insurance so that a person who doesn’t have a fixed, predictable income can actually buy insurance… in a small, affordable unit as and when he can afford it.”

The process of signing-up and purchasing insurance, as well as filing claims, also has to address the needs of an informal trader, he continued. Those living on a daily income usually do not have the option to stop work to visit an insurer’s office and fill out forms. DotXML has therefore developed technology that allows consumers to use their mobile phones to purchase insurance, file claims and even get paid out.

While Bezuidenhout said the needs of low-income consumers are generally the same across the continent, there are cultural differences that affect the insurance industry. For example, in Sudan insurance policies have to comply with Sharia law.

And in Ghana, where large funerals are a part of culture, consumers generally want two pay-outs when someone dies: the first to cover the funeral costs, and the second for a memorial at a later stage.

On the other hand, Tanzania’s large Muslim population means that funeral coverage is less culturally important. Greyling, who set up an insurance company in the country some years ago, said there is however a greater demand for life insurance pay-outs in the form of school fees for children in the event of a breadwinner’s death.

“My view is if you give people something that addresses their problems in a simple manner, that is also convenient and affordable, then they will take it. There is no doubt about that,” Greyling continued.

“We have seen some of these products in India, for example, where the numbers have just been absolutely staggering – [showing] how people activate these things when it addresses their problems.”