Uganda’s emerging oil industry has attracted many investors to the country, including players like Total and Tullow Oil, as well as suppliers to the industry, such as Halliburton and Baker Hughes. 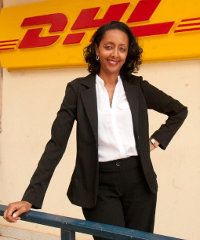 “The discovery of oil has helped to kick-start the economy of Uganda,” Asteway Desta, managing director of logistics company DHL Express Uganda, told How we made it in Africa. “When I came here in December, I could just feel the buzz when I go out on the streets. It has attracted lots of foreign direct investment. We have many more international companies investing now in Uganda than ever before.”

This has resulted in more shipments for DHL and the Ugandan branch is currently growing at an average of 15% per year.

The country’s growing number of small and medium enterprises (SMEs), predominately local traders importing a variety of products into Uganda, has also been identified as a huge potential market for DHL.

“If you go into downtown Kampala there is an area called Kikubo where you have got importers… they are importing everything – you name it. From photo frames to postcards to furniture to clothing, shoes, accessories, building materials, spare parts – everything is imported in this country and most of these people that are importing are not big, large-scale companies like you would imagine. They are actually small and medium sized enterprises… Every month they import in bulk different items, and most of them are not aware that DHL’s service offerings can assist them in their international trade.”

“So for us, if we create awareness in that particular group and introduce them to the idea that DHL is a transportation company that is accessible for them to use… then I think there is a big potential there,” she continued.

Desta describes Uganda as a “cash economy” and she has found that many of their customers, especially these SMEs traders, prefer to deal with DHL on a cash basis. For this reason DHL is expanding its retail footprint in the country and has opened 13 more service points this year alone.

However, like in many places across Africa, transport infrastructure is the major challenge for DHL’s business in Uganda. While Desta said that the government is investing in major highways and some inter-city roads, the streets in Kampala require an upgrade and are highly congested.

“Therefore, going forward, what we are doing is… we will be using motorbikes in order for our couriers to be able to navigate through the traffic more easily and allow them to get to their destinations faster,” she explained. “One of the biggest public transportation means in Kampala are motorbikes. Like you would call a taxi in another part of the world, here you would call a motorbike to come and pick you up. So we are also moving in that direction. We are reducing the number of cars and replacing them with motorbikes so our couriers can find it easier to navigate through the traffic.”

Desta has been the DHL country manager for Uganda for six months, and while she has had to relocate her family to the country, she has no regrets. “Doing business in Uganda is easy because the people are friendly and accommodating to foreigners.”

The World Economic Forum’s Travel and Tourism Competitiveness Report 2013 ranked 140 countries according to attractiveness and competitiveness in the travel and tourism industries. One of the indicators used to determine these rankings looked at how welcome tourists and foreigners feel in each country. Under the category ‘Attitude of population toward foreign visitors’, Uganda ranked 10th in Africa (and 40th in the world) for its friendliness to tourists.

“They are extremely good natured and welcoming. You get a warm reception wherever you go. And this is consistent throughout the country,” added Desta.

Drawing from her experience, Desta has the following advice for international companies considering entering the Ugandan market: “Create a transparent relationship with government; always ensure you’re compliant with the laws of the land; get a respectable lawyer to advise on various agreements; get your team motivated (embrace local people); and be visible – customers appreciate interaction with top management.”