US-born technology entrepreneur Richard Tanksley started his career at Motorola. After years of running his own businesses and working with companies that needed to expand globally, he moved to Africa in 2009 seeking adventure. He ended up working with technology start-ups as a senior faculty member at Ghana-based Meltwater Entrepreneurial School of Technology (MEST). He now heads the African division of Seedstars, a Swiss-based venture builder investing in emerging markets. One recent investment is Nigeria-based e-payment platform SimplePay. 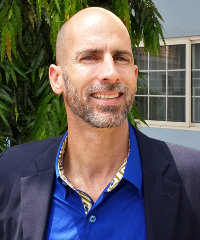 Tanksley spoke to Dinfin Mulupi about his experiences with African start-ups, being an expatriate in Lagos and his advice to westerners interested in working in Africa.

How did you end up in Africa?

I came seeking adventure. Frankly I was bored in the US and the economy was in the dumps. So I quit my job and moved to Cameroon. I had no job and didn’t know anyone, but within a week I had two offers. I ended up helping launch the Cameroon division of a mobile phone application called Mobile-XL. This is how my experience in tech start-ups in Africa started.

What did you learn about entrepreneurs and start-ups while teaching at MEST?

This is the best job I have ever had because MEST is changing the world. When I started the school was still fairly new. Nobody had ever done it before. There was no guidebook or research we could look at for help. We certainly made mistakes along the way, but learned from each one and made adjustments in the programme in real time.

The environment at MEST became fantastic. We tried to recreate the feeling of being a start-up in Silicon Valley so students would be infected with the urgency and scrappiness of a western start-up. One challenge was teaching them to think global. It’s hard to imagine creating a multi-billion dollar global company when you don’t have role models and have never left Ghana. When the dream of every graduate and their parents is for them to get a job working at a bank making US$500 a month, it’s hard to shift that to running a company bringing in $1m a month in revenue. Once the companies started making $500 a month, the students thought they had made it and were done, because that is as much as they could imagine. It took some effort changing that mindset.

Describe living and working in Ghana as an expat.

It’s an easy place to live. We call it “Africa for beginners”. It’s safe, quiet and calm. It has the same infrastructure problems as many others in sub-Saharan Africa, but you rarely have to worry about your personal safety. The people are friendly and nice, almost to a fault. It’s actually hard starting a business because everyone wants to know you and help you. So they will never say “no”, even when they know they can’t deliver what they promise.

You now work and live in Lagos. How does Nigeria differ from Ghana?

After hearing nightmare stories about Nigeria from Ghanaians, I was actually terrified to make the move. But when I got here I realised most stories were exaggerations. There is a mostly friendly rivalry between Nigerians and Ghanaians and both have embellished stories about each other over the years. Moving to Nigeria proved an easy transition.

I find many people here are more like Americans. They work really hard to buy things they don’t need, drive ridiculously huge cars, they go out, they have fun, they drink, they swear and they smoke. They are normal people with the same flaws as anyone, and are not afraid to admit it.

I think the best thing about Nigeria, specifically Lagos, is the energy of the work culture. Everyone works hard in Lagos. You can’t help it. Work starts early and usually does not finish until late night. There is no separation between work and pleasure. No matter what you are doing, you are working. Even if out with friends, or at dinner, or a club, you’re working because everyone you meet you may do business with. Like New York City, an exciting place to be.

Your challenges in working as a trainer and mentor to start-ups?

You can teach anyone the mechanics of starting a company. You can teach them to write software, you can teach them the mechanics of creating an efficient operation and how to sell and so forth. But you can’t teach having the ridiculous passion, drive, and burning desire to grow a company. In the US it seems to be in our nature. We have people who just work unbelievably hard for years to build something huge. I have found that drive is harder to find in Africa. Many people want to build a company that makes them and their family comfortable. Which is fine, but if you also want to grow the economy, you need to build past that point.

How has working and living in Africa changed you perception of the continent? A lot of Americans still see this as home to Ebola, dictators and corruption.

I tell my family and friends stories about Africa all the time, but in the end, if you want to know and understand Africa as much as is possible as an expatriate, you have to be here. The news does a disservice to Africa, which is an amazing place with more potential crammed into one continent than anywhere in the world. Almost every country went through problems of disease, dictators, and corruption. It is a natural part of the growth process of a nation.

I think you actually have to go through it so that you learn. You can’t start a country and say: “We are not going to be corrupt.” You have to live with corruption for years until finally everyone sees that it’s destroying the country and people’s livelihoods. The populous finally gets fed up and makes a change.

Any advice for expats coming to work in Africa?

Read a lot before you get here. Listen to radio stations online from the city you are going to. Local knowledge about politics and culture will go a long way towards ingratiating you to your hosts, and opening doors. Study a local language when you get there. Try to have more local than expat friends. Returnees are the bridge between western and local culture, you need them both as friends and employees. Remember, you are a visitor. You are here at the pleasure of the indigenous population. Respect them, or you’ll be sent home or wish you were home.