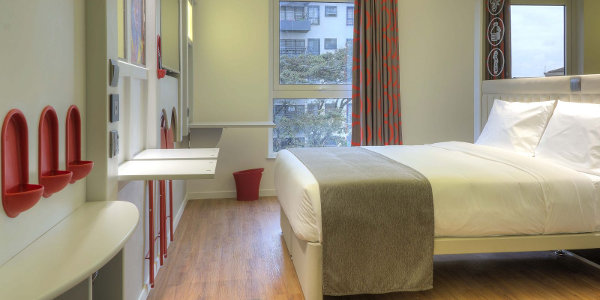 A double room at the Tune Hotel Nairobi

Tune keeps room costs down by offering what it calls a “limited service” – only the bare necessities. At one of its London properties, guests have to pay extra for a towel and toiletries, room cleaning and wifi.

Similar to low-cost airlines, the earlier the booking, the lower the price. When How we made it in Africa checked, a double room for one night on 1 March 2017 went for Ksh.13,000 (about US$125).

Stuart Clay, general manager at Tune Hotel Nairobi, explains business travellers typically don’t use most of the facilities that they are charged for at hotels, and that Tune promises customers a five-star experience at a three-star price.

He says since the opening, the market reception has been “mostly positive”, with the hotel playing host to 12 teams during the Safari Sevens rugby tournament.

When the hotel launched, a low room rate of Ksh.995 (about $10) was offered to generate awareness. “We wanted to launch into the market with a big bang and make a lot of noise. I think we achieved that,” says Clay.

However, he concedes that some customers must still get used to the limited-service concept. “We do not put telephones within the bedrooms. We get a small amount of resistance from guests saying they would like phones in the rooms. We are looking at the option currently of doing that, but no firm decision has been made on the way forward.”

Some 70% of Tune’s guests are business travellers, and 60% are local Kenyans.

The Kenya Tourism Board had projected a 33% growth in the tourism sector in 2016, driven by the revision of travel advisories against Kenya, improved security and aggressive marketing. In the first three months of 2016, the sector grew 16.8%, rising from a six-year negative growth trajectory.

Business tourist numbers are expected to grow with the increase in flights from Nairobi to markets such as China and the Middle East.

Tune is also looking to take advantage of a trend where more companies are relocating from the Nairobi CBD to the less-crowded Westlands area, where its hotel is based.

To grow the business, Tune has formed partnerships with other companies – for example, Tusker beer has branded the bar area for three years and domestic airline Fly540 is offering a bundled price for a plane ticket and accommodation at the hotel.

The chain plans to open eight to 10 hotels within the east Africa region in the coming years – its sights set on the cities of Dar es Salaam, Kampala, Kigali and Mombasa.